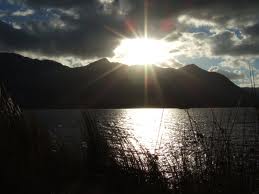 The Earth and everything else in the creation is the very evidence of the Creator.

There are a number of people in western countries who identify themselves as either atheists (those who claim to believe that there is no God) or Gnostics (those who say they believe in God but not in any particular religion).

Some of this may be attributed to perceived advances in science and medicine in western countries and the notion put forth by humanists and communists that mankind is no longer in need of ‘God’ because of the technological prowess of the ‘modern’ man. Some perceive that because man now has some degree of understanding of agriculture, weather patterns, and developments in science and medicine that we no longer have to call out to a Supreme Being to fulfill our needs.

Usually, those who make this claim are themselves somewhat educated and typically do not find it attractive to admit that despite all of their so-called intelligence, they are still inferior to One who has supreme and perfect Knowledge. Based on this scientific, analytical way of thinking, the atheist’s argument is based on what science has developed as part of its method of observation. In other words, there must be concrete evidence to prove the existence of a Creator and if said evidence cannot be obtained, then the only possible conclusion is that one does not exist.

As a professed atheist once told me, ‘I cannot look out into the Earth and see anything that proves that there is a God.’ However, the entire basis of their argument is flawed because they seek to prove or disprove the existence of the Creator based on the level of sophistication that man happens to be at, at that particular time. History is replete with outstanding scientific achievements and discoveries at one point in time, only to be debunked at a later point in time due to man’s ever changing circumstances and developments.

Man is always convinced that the achievement or the discovery of his time is the apex of whatever particular field of study he is involved in at the time. It is only later, after more advances, that man discovers that they have not discovered all that can be discovered and that they have yet to begin to unravel the mysteries of creation.

At one point in time, it was considered a scientific fact that spoiled meat could transform into maggots. It was only until technological advances allowed for further study using microscopes and testing in a controlled environment that this theory was disproved. Not to mention other little miscalculations such as the earth being flat or the earth being the center of the solar system.

Medical science proved that eggs were high in cholesterol and contributed to high blood pressure, heart disease, and obesity. Then, a few years later, it was discovered that someone made a miscalculation and eggs were not as bad as they had once thought. So when does man attain the level of perfection in his understanding of the universe around him to be qualified to prove or disprove the existence of the Creator based on science’?

What is astonishing is that they are no different than the disbelievers of old who wanted sign after sign, proving that the truth has been revealed from Allah. Yet, they kept on disbelieving even after Allah’s signs were made clear to them.

Let us revisit the statement of the atheist to me; ‘I cannot look out into the Earth and see anything that proves that there is a God.’ Well, the Earth and everything else in the creation is the very evidence of the Creator. Everything in creation is a sign or ayah of the Creator. It is only the worst of creatures that deny these signs. The Noble Qur’an establishes that if one truly pondered the creation, we would submit to the One Who created it. Allah, in Surat An-Nahl lays out numerous signs for those who would take heed:

He has created the heavens and the earth with truth. High be He Exalted above all they associate as partners with Him. He has created man from Nutfah (mixed drops of male and female sexual discharge), then behold, this same (man) becomes an open opponent. And the cattle, He has created them for you; in them there is warmth 36 (warm clothing), and numerous benefits, and of them you eat. And wherein is beauty for you, when you bring them home in the evening, and as you lead them forth to pasture in the morning. And they carry your loads to a land that you could not reach except with great trouble to yourselves. Truly, your Lord is full of Kindness, Most Merciful. And (He has created) horses, mules and donkeys, for you to ride and as an adornment. And He creates (other) things of which you have no knowledge. (An-Nahl 16: 3-8)

Allah continues to explain in detail His signs:

He it is Who sends down water (rain) from the sky; from it you drink and from it (grows) the vegetation on which you send your cattle to pasture; With it He causes to grow for you the crops, the olives, the date-palms, the grapes, and every kind of fruit.
Verily! In this is indeed an evident proof and a manifest sign for people who give thought. And He has subjected to you the night and the day, the sun and the moon; and the stars are subjected by His Command. Surely, in this are proofs for people who understand. And whatsoever He has created for you on this earth of varying colors. Verily! In this is a sign for people who remember. (An-Nahl 16: 10-13)

So when one truly reflects on the statements of Allah, Most High, the position of those who call themselves atheists becomes apparently ridiculous. The da`i can explain to the atheist that just because we cannot see or hear the Creator, his signs are the proof itself.

There are many instances in life where we do not see the cause or the origin of a thing but we know of it because of the thing which it produced. When we see an apple at the market, we automatically know- based on logical deduction- that it came from a tree. Do we see the tree?

It would be absurd to try to convince someone that the next time they see an automobile, that the alloys, metals, machinations, plastics, glass, fiber-glass and other materials simply bumped into one another and kept bumping into each other until this sophisticated peace of technology was formed without the aid of any intelligence or deliberation whatsoever. Well, this is the basic argument of atheists with regard to a much greater collection of materials, i.e., the universe.

To be quite honest, I do not believe that there are any true atheists. I sincerely believe that the compulsion to worship the Lord of the creation still exists in every human. Allah, Perfected is He, has stated that all of mankind has at one time testified to the existence of the Creator.

And (remember) when your Lord brought forth from the Children of Adam, from their loins, their seed and made them testify as to themselves (saying): “Am I not your Lord?” They said: “Yes! We testify,” lest you should say on the Day of Resurrection: “Verily, we have been unaware of this.”
(Al-A`raf  7: 172)

However, man follows his desires and as a result of doing so, begins to move away from this disposition. The atheist is no different.