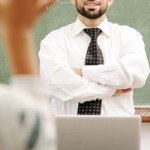 As Muslims, we are not always aware of the constant responsibility we have to demonstrate Islam consistently, to ensure that our outward actions are in harmony with our inner faith..

Outward interpretations of the faith need to accompany a moral inner character.

Children will not hesitate to point out any inconsistencies -whether great or small- which they notice in their parents. In my own home, I impose a strict limit on my children’s daily ‘screen time’ exposure to television, computer, mobile phone and so on, yet don’t hesitate to rush to check my smartphone the moment I awake and spend many hours on the laptop every day. And it has not gone unnoticed that I ration their chocolate intake but am rather more liberal with my own.

In every culture, there are idioms centering around this principle. The proverb ‘the pot calls the kettle black’ is well-known in many countries. In Arabic the saying goes, ‘The camel cannot see the crookedness of its own neck’. In Vietnamese the language conjures up a vivid image, ‘The dog ridicules the cat for being hairy’.

As Muslims, we are not always aware of the constant responsibility we have to demonstrate Islam consistently, to ensure that our outward actions are in harmony with our inner faith. Nearly 60% of Americans say they have never met a Muslim, so when they do meet one, people are quick to associate that person’s actions with those of Islam. This inevitable requirement to be a representative is the same for any minority group; a white friend working in Africa in an otherwise all-black environment was somewhat surprised to be told by her colleagues, “You’ve shown us it is possible for us to laugh with white people.”

The need for Muslims to live continually in line with the many positive Islamic values is a relentless responsibility but can be one filled with potential. If you are friendly to your neighbours, your neighbours may assume –or at the very least, hope- that all Muslims are like this.

If your children do their homework and return all their school forms on time, the teachers are more likely to respect the Islamic habits they are being taught at home. If you prove yourself to be an effective, efficient and trustworthy manager, your work colleagues will more likely be happy to work with Muslims.

If your child throws a tantrum at the supermarket and you react in an uncontrolled manner, whilst some fellow shoppers may empathize, others will note that Muslims either can’t discipline their children or that they have no control as parents. And if you choose to wear overtly Muslim dress such as hijab but swear loudly at someone who annoys you, it will be hard for onlookers to be convinced that a hijab is an outward manifestation of an inner modesty.

The Bible and the Qur’an are clear that outward interpretations of the faith need to accompany a moral inner character. Jesus condemned the Pharisees for being so blinded by the minute details that they failed to develop spiritually. In Matthew 23:1-3, “Then Jesus said to the crowds and to his disciples, ‘The scribes and the Pharisees sit on Moses’ seat; therefore, do whatever they teach you and follow it; but do not do as they do, for they do not practice what they teach.’”

Brennan Manning, author and priest, suggests that this problem continues into the modern era, “The greatest single cause of atheism in the world today is Christians, who acknowledge Jesus with their lips, and walk out the door, then deny him by their lifestyle.”

Prophet Muhammad (peace be upon him) was described by his wife `A’ishah as ‘the walking Qur’an’, one who embodies the practical message of Islam. It says in the Qur’an: “So whoever hopes for the meeting with his Lord – let him do righteous work and not associate anyone in the worship of his Lord.” (Al-Kahf 18:110)

We can learn from the way Muhammad lived out Qur’anic principles consistently, in both the public and private sphere. For example, in public, he was comfortable to engage in discussion with women; in private he repeatedly refused to accept a dinner invitation unless his wife was also invited.

Prophet Muhammad was very aware that every action he took would be interpreted by those around him as the Islamic way to behave, and so he was always sure to differentiate between what were his actions as a Prophet and what were his actions simply as an individual. For example, when he was offered lizard and locusts -typical foods in the culture of that time- which he happened to dislike, each time he refused he explained clearly: ”I neither eat it nor do I prohibit it”. (Muslim)

Unfortunately the rest of us often forget that our actions can indicate to others we hold certain principles. Many years ago, I took a Christian group around the Shah Jahan mosque in Woking, one of the oldest mosques in the UK. I didn’t mention any possibility of refreshments as I noticed the door to the kitchen was locked. Five years later, when I met some members of that same congregation and we got into conversation, they asked me “Do you miss having tea or coffee?” They had taken note of the lack of hot drink available and assumed caffeine was against the Islamic religion.

We may not even have thought deeply about what our principles are. A Muslim woman may wear hijab, but not hesitate to gossip with a friend. A Muslim man may be adamant he will not eat pork, yet be happy to let prayer times pass by without getting up to pray. There will always be those who choose to give up alcohol only in Ramadan.

It is inevitable that wider community will be quick to spot inconsistencies in the behavior of Muslims, just as we do with our politicians, police, and school teachers, and as children do with their parents. And until more people know Islam better, and more Muslims personally, we must remember that the actions of a single Muslim may be judged to be representative of all.

Fortunately the ultimate judge is God, described as Al Hakim. The Qur’an states:

Say, ‘God! Creator of the heavens and earth! Knower of all that is hidden and all that is open, You will judge between Your servants regarding their differences. (Az-Zumar 39:46)

We are only human, and we will occasionally slip up. Only God knows our true intentions, and He knows them even better than we know them ourselves. Meanwhile, I intend to make a conscious effort to drive carefully and not be too late for events.