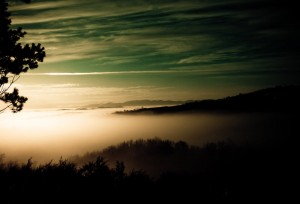 When you say that Allah means this or Allah means that in a specific verse, you are actually speaking or saying something on behalf of Allah.

In his Tafsir Imam Al-Qurtubi talks about such people who say when they read the Qur’an, in my mind this comes to my mind, or my heart tells me this, and he concludes who reads the Qur’an and says, “ask your heart” or “my heart tells me,” and so forth, they are speaking about God without `ilm (knowledge), which, as we will talk about, one of the greatest sins that we could commit, and that they are actually from those who have nothing to do with Islam, and he said they should be killed as murtadeen (apostates).

Say: the things that my Lord has indeed forbidden are: shameful deeds, whether open or secret; sins and trespasses against truth or reason; assigning of partners to Allah, for which He hath given no authority; and saying things about Allah of which you have no knowledge. (Al-A’raf 2:33)

In discussing this verse, he says, first of all there are some sins which are forbidden due to their own evil nature, and others are forbidden because they lead to some evil or have some evil in them.

And he said with respect to this verse, all of these four, they- in their own essence are,  prohibited by Allah because of the evil in them. Continuing his discussion, he said that Allah first mentions evils, and he says this is the least of the sins that He mentions, after that He mentions the sins of transpassing against the truth; this is a greater sin that the first one that Allah mentioned.

And then He mentioned making shirk (associating other beings/gods with Allah), and finally He mentioned saying things about Allah of which you have no knowledge. He is saying that Allah is going from the lesser to the greater.

– Ascribing something falsely to Allah,

– Changing or altering the religion of Allah,

– Affirming something declaring false or declaring

something false as true, and it also includes supporting something that Allah dislikes or opposes,

He said, for example, the polytheists claim what they are worshiping instead of Allah was something to take them closer to Allah, so the cause of their shirk was saying something about Allah without knowledge, something they did not know about Allah.

Sheikh Jamal Ed-Din Zarabozo is an internationally known writer and speaker who has lectured in North America, Europe, Australia and the Middle East. He is also the author, translator, and co-author of many books.