Moses (peace be upon him) did not digress from conveying the truth and he did not give up the initiative which was in his hands but he reverted immediately to the main subject. 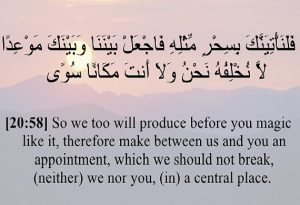 Firmness in Conveying the Truth

We cannot imagine the speed and grace with which he turned back and took the wise step which has no parallel elsewhere. He solved the entire problem in a few words, and immediately returned to the main theme, “The knowledge thereof is with my Lord in a Record. My Lord neither errs nor forgets.” (Ta-Ha 20:52)

This did not allow the continuity of the talk to be broken. He described such attributes of Allah which Fir`awn wanted to avoid by changing the subject.

He (Musa) said: ‘The knowledge thereof is with my Lord in a Record. My Lord neither errs nor forgets, the One Who has appointed the earth as a bed and has threaded roads for you therein and has sent down water from the sky and thereby We have brought forth diverse kinds of vegetation (saying): Eat! and feed your cattle! Lo! herein are signs for men of thought.’ (Ta-Ha 20:52-54)

The Change in Stratagem by Fir`awn

We find another example of it in Surah Ash-Shu`araa’:

This was the stratagem of Fir`awn and a clever attempt to change the course of talks. He wanted to divert the attention of his courtiers from the main topic with his exuberant talk and knowledge of human psychology (which a ruler acquires through experience) and political maneuvering in order to deal with the Prophet Moses. But Moses (peace be upon him) was not prepared to budge from the main subject.

Fir`awn said: “What is the Lord of the Worlds?” He wanted Moses to change the course of the talk and open the way for debate. But Moses stressed Fir`awn’s weakest point and said: “Lord of the heavens and the earth and all that is between them, if you had but sure belief.”