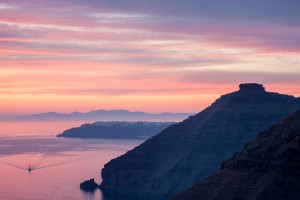 Religion is the inner conviction that determines our attitudes, orientates our spirituality, and engenders the sense of purposefulness in our relationship with existence as a whole.

“What we call visible nature or this world must be but a veil and surface-show whose full meaning resides in a supplementary unseen or other world”. (William James)1

Man never gives up the habit of posing critical questions about himself, life, and reality. Because man is endowed with a unique faculty of reasoning that is exclusively characteristic of him, it stands to reason that man has a legitimate right in posing such questions.

Astonishingly, this involuntary and irresistible habit to question things has treated all people on an equal basis, because all various parties develop a natural tendency to put forward the same basic, but significant, questions. Most – if not all – of us seem to arrive at the same cul-de-sac when it comes to answering questions about life such as: why am I here? And, what will happen to me after death?

Through the ages, these questions have been asked by great philosophers, scientists, thinkers, and at the same time, simple villagers, uneducated people and children alike. These are the kind of questions which force parents to evade answering their child’s curiosity by saying, “It‘s a good idea not to ask these questions my dear”, or just stand there perplexed and open-mouthed.

Although, it is true that man has instituted vast and complex organizations to administer his affairs and seems to have reached the pinnacle of material progress, he fails to fathom the mystery of existence, the mystery of infinity and eternity, the mystery of birth and death.2

This situation has encouraged man to adopt different approaches towards comprehending reality; approaches that involved various schools of study and research ranging from the science of philosophy, with all its ramifications, to that of natural science and natural theology. Brian Greene, a contemporary scientist, assesses the true value of all scientific undertakings achieved so far by saying:

“Progress in physics, such as understanding the number of space dimensions; or progress in neuropsychology, such as understanding all the organizational structures in the brain; or, for that matter, progress in any number of other scientific undertakings may fill in important details, but their impact on our evaluation of life and reality would be minimal. Surely, reality is what we think it is; reality is revealed to us by our experiences.”3

“The scientific picture of the real world around me is very deficient…It (science) cannot tell us a word about red and blue, bitter and sweet, physical pain and physical delight; it knows nothing of beautiful and ugly, good or bad, God and eternity. Science sometimes pretends to answer questions in these domains, but the answers are very often so silly that we are not inclined to take them seriously.”4

Out of this frustration came a dire need to question the validity of man’s approaches towards understanding reality.

Would it be reasonable to continue pursuing the answer through materialistic methods in order to unravel mysteries of a metaphysical nature?

Questions like these have revived human interest in practices once discredited as mythical, superstitious, and out-dated, practices such as magic, pseudo spiritualism, mysticism, voodoo-like rituality, and occult religiosity. These too only worsened the human predicament and turned life into an illusion, unworthy of any appreciation.

Regrettably, the problem at hand appears to be a cyclic one. When man reaches the climax of his efforts to identify his state of being, there is the possibility of getting entangled in the fallacies of another man-made conceptualization or being veered off by the miscalculations of human conjecture.

Is there a way out? Will there be a time when man begins to acquire a strong distaste for his pompous theorizations and come to realize the misleading aftermaths of human speculation?

At this critical stage, religion has a word to say. But before we listen to it, let us pose these starter questions to guide our discussion:

What is religion? Is it a man-made conception? If not, then in what way can it answer our questions and dismiss our longstanding uncertainties?

The Position of Religion

“Every serious and reflective person realizes, I think, that the religious element in his nature must be recognized and cultivated if all the powers of the human soul are to act together in perfect balance and harmony”. (Max Planck)5

If we are to consider the enormous number of cults and beliefs prevalent in different parts of the world, it would be extremely difficult to give a clear-cut, exhaustive definition of the term ―religion‖. Nevertheless, we still need to know what religion is, or at least form a basic understanding of it in our minds.

According to James Barham:

“Religion is many things, but if there is one characteristic that all religions have in common, surely it is faith. What is faith? This itself is a highly disputed matter, but perhaps we may define it as a strong emotional attachment to an all-encompassing worldview that outstrips the available empirical evidence.”6

Human beings cannot help associating themselves with some kind of holistic worldview, some kind of deep-seated belief which they inescapably feel worthy of veneration and admiration. In practice, this faith may exist in the name of a dogma, an ideology, a philosophy, a principle, a system, a doctrine, and so on.7

This faith or belief eventually becomes an irreducible representation of our ―religion: the inner conviction that determines our attitudes, orientates our spirituality, and engenders the sense of purposefulness in our relationship with existence as a whole.

Dr. Zakir Naik, an expert in comparative religion, rightly remarked that ideologies and man-made systems are – in the deepest sense of the word ‘religion’- only belief systems competing to assume the role of religion, but on their own terms. Naik wrote:

“Marxism, Freudianism and other ‘non-religious’ beliefs tried to attack the roots of organized religions. But these, in turn, developed into belief systems themselves. For instance, when communism was adopted by many countries of the world it was preached with the same commitment and fervor that characterizes the act of preaching and propagation of religions”7

This may justify why the Islamic definition of religion is of particular interest. The Arabic term ‘deen’ is used to mean religion, but in a much broader sense. In Islam, deen (religion) means one’s way of life, and the reality around which someone’s life revolves is called an Ilah or a god.

As Paul Tillich, the German Lutheran theologian, once noted, religion – in the widest sense – is “whatever concerns a person or a people most. This can, of course, be the Living God, but equally it can be nationalism or financial success.”8

In this regard, William C. Chittick has something to say:

“The gods in a world of takthir (in Arabic): plurality, multitude, and diversity[ are legion. To mention some of the more important ones would be to list the defining myths and ideologies of our times – freedom, equality, evolution, progress, science, medicine, nationalism, socialism, democracy, Marxism. But perhaps the most dangerous of the gods are those that are the most difficult to recognize”.

(6) Barham, James (2004) “Why Am I Not A Darwinist” in Uncommon Dissent: Intellectuals Who Find Darwinism Unconvincing, Edited by William A. Dembski (ed.), Intercollegiate Studies Institute.