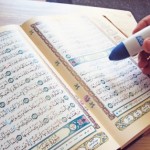 The Qur’an and the life-example of Muhammad are the only reliable sources available to mankind to learn God’s Will in its totality.

One may wonder how, in the dark ages 1400 years ago in a benighted region of the earth like Arabia, an illiterate Arab trader and herdsman came to possess such light, such knowledge, such power, such capabilities and such finely developed moral virtues?

One may say that there is nothing peculiar about his Message, that it is the product of his own mind.

If this is so, then he should have proclaimed himself God. And if he had done so at that time, the peoples of the earth who did not hesitate in calling Krishna and Buddha gods and Jesus the Son of God, and who could without compunction worship such forces of nature as fire, water and air – would have readily acknowledged him as such.

But he argued just the opposite. For he proclaimed: I am a human being like yourselves. I have not brought anything to you of my own accord. It has all been revealed to me by God.

Whatever I possess belongs to Him. This message, the like of which the whole of humanity is unable to produce, is the message of God. It is not the product of my own mind. Every word of it has been sent down by Him and all glory to Him Whose Message it is.

All the wonderful achievements which stand to my credit in your eyes, all the laws which I have given, all the principles which I have enunciated and taught none of them is from me. I find myself incompetent to produce such things out of my sheer personal ability and capabilities. I look to Divine Guidance in all matters. Whatever He wills I do, what He directs I proclaim.

Hearken! What a wonderful and inspiring example of honesty, integrity, truth and honour those sentiments are! Liars and hypocrites often try to take all the credit for the deeds of others, even when they can easily be found out. But this great man does not claim any of these achievements for himself even when no-one could contradict him as there was no way of establishing the source of his inspiration.

What more proof of perfect honesty of purpose, uprightness of character and sublimity of soul can there be! Who else can be more truthful than he who received such unique gifts through a secret channel and still pointed out their source? All these factors lead to the irresistible conclusion that such a man was the true Messenger of God.

His Life and Teachings

Such was our Prophet Muhammad (blessings of Allah and peace be upon him). He was a prodigy of extraordinary merits, a paragon of virtue and goodness, a symbol of truth, a great apostle of God and His Messenger to the entire world.

His life and thought, his truthfulness and straightforwardness, his piety and goodness, his character and morals, his ideology and achievements – all stand as unimpeachable proof of his prophethood.

Any human being who studies his life and teachings without bias will testify that he was the true Prophet of God and the Qur’an- the Book he gave to mankind – the true Book of God. No serious seeker after truth can come to any other conclusion.

It must also be clearly understood that now, through Muhammad alone can we know the straight path of Islam. The Qur’an and the life-example of Muhammad are the only reliable sources that are available to mankind to learn God’s Will in its totality.

Prophet Muhammad is the Messenger of God for the whole of mankind and the long chain of prophets has come to an end with him. He was the last of the prophets and all the instructions which it was God’s Will to impart to mankind through direct revelation were sent by Him through Muhammad (peace be upon him) and are enshrined in the Qur’an and the Sunnah.

Anyone who seeks to become a sincere Muslim must have faith in God’s last Prophet, accept his teachings and follow the way he has pointed out to man. This is the road to success and salvation.