One cannot be a Muslim if he does not believe in Jesus as well as all other prophets sent by God- the Qur’an names twenty-five prophets and messengers and suggests that there were many more- including Adam, Noah, Abraham, David, Solomon, Moses and Muhammad (peace be upon them all). 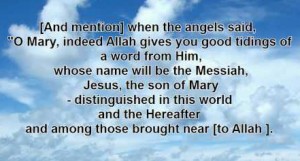 Islam considers Jesus Christ, the son of Mary, as one of the great prophets of God, worthy of respect and honor but not worship.

Muslims have the highest regard for Jesus and await his second coming. The Islamic view of Jesus is one between two extremes. The Jews rejected his prophethood and called him an impostor, while many Christians regard him as the son of God and worship him as such.

Islam considers Jesus Christ, the son of Mary, as one of the great prophets of God, worthy of respect and honor but not worship. He was sent to confirm and renew the basic doctrine of belief in God alone and obedience to Him.

According to the Qur’an, he was born miraculously without a father:

Relate in the Book (the story of) Mary, when she withdrew from her family to a place in the East. She placed a screen (to screen herself) from them; then We sent her our angel, and he appeared before her as a man in all respects. She said: “I seek refuge from you to (Allah) Most Gracious: (come not near) if you does fear Allah.” He said: “Nay, I am only a messenger from thy Lord, (to announce) to you the gift of a pure boy”…. (Maryam 19:16-19)

And he was not crucified but raised up to God.

(And remember) when Allah said: O Jesus! Lo! I am gathering you and causing you to ascend unto Me, and am cleansing you of those who disbelieve and am setting those who follow thee above those who disbelieve until the Day of Resurrection. Then unto Me you will (all) return, and I shall judge between you as to that wherein you used to differ. (Aal `Imran 3:55)

And because of their saying: We slew the Messiah, Jesus son of Mary, Allah’s messenger – they slew him not nor crucified him, but it appeared so unto them; and lo! those who disagree concerning it are in doubt thereof; they have no knowledge thereof save pursuit of a conjecture; they slew him not for certain. But Allah took him up unto Himself. Allah was ever Mighty, Wise. (An-Nisaa’ 4:157-158)

The Qur’an attributes to him miracles that are not even mentioned in the Bible. However, Islam sees the deification of Jesus as a reversion to paganism, and the divinity of Jesus is categorically rejected within the Qur’anic text:

They surely disbelieve who say: Lo! Allah is the Messiah, son of Mary. The Messiah (himself) said: O Children of Israel, worship Allah, my Lord and your Lord. Lo! who ascribes partners unto Allah, for him Allah has forbidden paradise. His abode is the Fire. For evil-doers there will be no helpers. (Al-Ma’idah 5:72)

Such doctrines as the «trinity», «divine sonship» and «atonement» are not accepted by Muslims simply because they did not originate from Prophet Jesus himself.

It is known that most of the Gospels were written by men long after the time of Jesus and that much of the New Testament was compiled from the writings of Paul and his students. Unmistakable contradictions have appeared in the various «modern,» «revised» and «amplified» versions of the Bible.

The once purely divine message conveyed by Jesus has obviously been corrupted by human input and altered through numerous translations; the original texts no longer exist.

The Gospels were written several decades after Jesus’ departure, and none of their authors had actually seen Jesus or heard him speak. Moreover, they were written in Greek while Jesus spoke Aramaic. Those Gospels presently in circulation were not selected from among the others and authorized by the Church until the decisions of the ecumenical Council of Nicea in the year 325 CE.

Nevertheless, belief in the divine scripture, not in its present form but as it was originally revealed to Prophet Jesus, is an article of Islamic faith.

The final revelation from God is the only criterion by which information in previous scriptures can be evaluated. Therefore, whatever the Bible says about Jesus that agrees with the Qur’an is accepted by Muslims, and what is contrary to it is rejected as a product of human intervention.