“To kill or not to kill a Muslim.”

Disturbing? It was the subject line of an email sent several weeks ago to Jameel Syed, the man behind Project Muaddhin: A Historic Journey Across America. It’s actually one of several hate emails he’s received upon beginning his project.

What’s so controversial about this project, though? On April 3rd, 2015, Jameel set out to become the first muaddhin in the history of the United States to recite the Muslim call to prayer in all fifty states.

Caller to Prayer… to Islam

“American Muslims feel disconnected and distressed by the influx of hate and bigotry against them in their own country. I started this project first to seek the pleasure of God and then in the hopes of revitalizing the American spirit in the power of prayer.”

Jameel explained, “the Muslim narrative has long been hijacked by a group of people who do not represent 1 billion plus Muslims living in peace and harmony within their communities across the globe. This project seeks to show the amazing work Muslim communities are doing, one state at a time.” 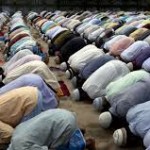 The Project is a means to seek the pleasure of God and then in the hopes of revitalizing the American spirit in the power of prayer.

Attempting to reach all 50 states in just 35 days, Jameel seeks to show the world that American Muslims not only are completely and harmoniously integrated into society, but are stronger and resilient than ever before, even amidst increased Islamophobia.

Showcasing the Beauty of Islam

Project Muaddhin looks to showcase the beauty and vibrance of Muslim communities across the United States. Along with the Adhan, Jameel will be interviewing mosque leadership in all 50 mosques, focusing on three topics: the history of Muslims within that state, the community and interfaith work the mosque is doing, and a customized message mosque leadership want to send to people around the world.

For Yahya Sultan, the campaign manager for Project Muaddhin, this project is also a very personal journey:

“I was born and raised here, this is my country, and I refuse to stand silently by while the hate continues to fester and spread in our country. I have served my community in different capacities, just like many other Muslim Americans, from being a Crew Chief for my local Ambulance Corp, to serving as a Community Emergency Response Team Coordinator for my county, and currently as a Disaster Assistance Response Team member for Islamic Relief USA, I always feel pressured to prove myself to people that I’m as American as apple pie and just as peaceful.

“The fact is I don’t have to prove or defend myself for the actions of people who do not represent my religion. I want everyone to see what I see on this trip, I want people, Muslim and non-Muslim alike, to see how awesome Muslims are in every state and provide a platform for them to reclaim their own narrative. We are going to share their stories with the world.”

Suffice to say, the buzz has been building within the American Muslim community, and more and more people have become inspired by Jameel’s mission. Scholars from all over the country are supporting the project, which is being chronicled step by step on Facebook. A Gofundme campaign is up and gaining traction.

It is his hope that the journey will inspire American Muslims – and Muslims across the globe; to take it upon themselves to do good for the greater community.