Allah commanded Noah to build up a ship, the Ark, and as he was building it, the passing folk- chiefs mocked him. However, Noah (peace be upon him) mocked them too as a means of warning from the coming divine punishment. 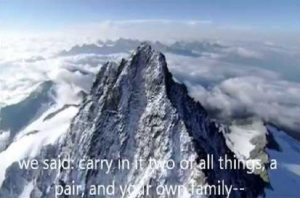 Allah saved Noah and the believers; and drowned the arrogant people who rejected faith.

Actually, Allah (the Exalted) accepted Noah’s prayer, saved Noah and the believers; and drowned the arrogant people who rejected faith and disobeyed Allah and his messenger:

So We delivered him and those with him, in the Ark filled (with all creatures). Thereafter We drowned those who remained behind. (Al-Qamar 54:119,120)

Noah called Allah and requested about his drowned son as he was one of his family; but Allah (Exalted be He) told him that he was not of his family and preached him not to be as ignorant people:

And Noah called upon his Lord, and said: ‘O my Lord! Surely my son is of my family! And Thy promise is true, and Thou art the Most Just of judges! (Hud 11:45)

The answer came obviously. There should be a complete termination of relations between the prophet and the unbelievers, even though some of them were his blood relatives, thus:

He said: ‘O Noah! He is not of thy family: For his conduct is unrighteous. So ask not of Me that of which thou hast no knowledge! I give thee counsel, lest thou should act like the ignorant! (Hud 11:46)

However, what seemed to escape Noah’s mind was that he considered his son a member of his family. He might not have been aware that his son was unbeliever or he considered Allah’s order had included his son. “Noah said: ‘O my Lord! I do seek refuge with Thee, lest I should ask Thee for that of which I have no knowledge. And unless Thou forgive me and have Mercy on me, I should indeed be lost!’” (Hud 11:47)

A Grateful Slave of Allah

The word came: “O Noah! Come down (from the Ark) with peace from Us, and blessing on thee and on some of the peoples (who will spring) from those with thee: but (there will be other) peoples to whom We shall grant their pleasures (for a time), but in the end will a grievous penalty reach them from Us. (Hud 11:48)

The final resting place of the ship was referred to as Mount Judi. Noah is called “a grateful servant.” (Hud 11:44) This has been the story of Prophet Noah (peace be upon him). It started with dialogues between Noah and his people, his son, and his Lord. It ended with him having a dialogue with his Lord, bringing his mission to an end by asking for clarifications of certain aspects, which he found ambiguous and were pressing for answers.

In the end, Allah granted him, and the group of believers who followed him, peace and blessings.

Zidan(1998:153) points out that Prophet Noah, to win people to his side, addressed them gently with a decent language saying “Oh my people.”,  “Oh my tribe.”  However, Zidan adds that being decent and courteous with people does not mean to beautify wrong doing. Hence, YMs should enjoy strong faith in Allah’s supreme power as well as good manners so that they can be able to create interest among their Muslim ( or non-Muslim) friends and help them recognize the truth and accept it.

The real relationship between believers is mainly based on belief. Hence, religion is the real Kinship. Atiyeh (2000:43) assures that,

“The kinship between Noah and his son is not important; as disbelief cancels the relationship and abolishes the rights between people because of the difference between their religions, and Islam is the real kinship; hence a Muslim does not inherit a disbeliever nor a disbeliever inherits a Muslim.”

From Noah’s dialogue with his people, we learn:

– to keep persistent and firm on what they believe is right and follow all possible means to introduce Islam to non-Muslim friends in the hope of saving them from Allah’s wrath and Hell Fire.

– about the foolishness of Noah’s people who used to make idols from stones, by their own hands, and  worship them.

– that Noah, who was a forgiving and patient Prophet, did not pray Allah to destroy the disbelievers until it was revealed to him that none would believe more than the previous believers.

– and that Noah is the second father of humanity as all human beings drowned in the flood except Noah and the believers in the ark.