All praise is due to Allah who expressed the highest praise for the “caller” to his religion; to guidance, saying: “And who is better in speech than one who calls to Allah and works righteousness and says: ‘Surely I am of the Muslims.’” (Fussilat 41:33)

And may Allah’s peace and blessings be on Prophet Muhammad, the role model, who said: “Whoever calls to guidance will have a reward similar to that of one who follows it.” (Muslim) 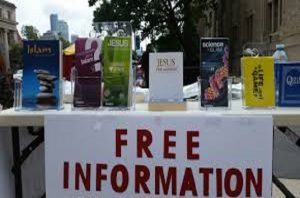 The various locations where the invitation can be given like market places, public buses, offices, lunch rooms, cafeterias, and restaurants.

Muslims know that Allah is the one who honored them with the religion of Islam and made them responsible for fulfilling the trust of spreading it. Furthermore, they know that they will be asked about this responsibility, as Allah says:

This is a reminder to you and your people and you will be asked (questioned). (Az-Zukhruf 43:44)

They also know that if they fulfill this trust and become a reason for the guidance of others to Almighty Allah, they will receive a reward greater than they can possibly imagine, as the said:

Say: Let them rejoice in Allah’s grace and mercy, for it is better than what they accumulate. (Yunus 10:58)

And the Prophet (peace be upon him) said, “For Allah to guide someone by your hand is better for you than anything this world contains.” (Al-Bukhari)

It is from Allah’s grace upon us in these times that there are many ways to give da`wah (calling to Islam) and sufficient opportunities for everyone to participate and benefit from its great rewards. One who calls to Islam is obliged to choose the most suitable way for those whom he or she calls.

Furthermore, the caller has to vary these methods according to the particular circumstances he finds himself in, as Prophet Noah and the prophets before him did.

The responsibility of the caller is to be aware of the various forms of invitation in order to facilitate his work. The caller should also direct his invitation to everyone, including his immediate family, relatives, servants, guests, neighbors, colleagues and his friends.

Cooperation in da‘wah is also important as there are many others striving to give the invitation whose skills and experience may benefit you and yours may benefit them.

Learning from their experiences will help you to be more creative and upgrade your knowledge and da‘wah skills. Consequently, the caller should eagerly encourage others to collaborate with others in da‘wah and to give their utmost in serving the religion, whether they are from his family or not.

Furthermore, he or she should utilize a variety of da`wah materials and advertisements to recruit others to this noble cause by jointly printing books, pamphlets, and brochures, as well as copying tapes, CD, video tapes, etc. and distributing them as widely as possible within his or her circle of friends as well as outside of the circle.