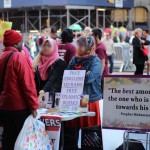 Helping someone find the beauty in Islam through a Muslim’s character and actions is more commendable and righteous than causing someone to feel embarrassed or offended.

The first: A young man sees a Muslim woman sitting behind a table that reads, ‘Free Qur’ans and Info on Islam’, on his campus. The young man has been wanting to learn more about Islam and thinks this as the perfect opportunity.

In his desire to show his respect and acceptance of the Muslim woman behind the table, he enthusiastically approaches the Muslim woman and introduces himself, sticking out his hand in introduction. She, having apprehended this moment, responds to his innocent gesture matter-of-factly. ’I don’t shake men’s hands’, she states and leaves his hand hanging. He, confused and embarrassed, recoils his hand and begins to apologize if he had offended her while she tries to begin explaining something about modesty and gender. He leaves the table possibly more interested, but also, possibly turned off.

The second: The same young man is approaching that same Muslim woman behind the da`wah (outreach) table. She sees him coming and prepares herself. As he approaches and sticks out her hand, she sticks hers out and passes something to him in their exchange. Instead of her hand, he feels something big, cold and hard. He looks at it and realizes… It’s a wide bar of chocolate! She smiles at his surprise and confusion and explains: ‘We emphasize professional relationships through modest interactions between genders. So instead of exchanging handshakes, we exchange chocolate!’

Their hands touching were completely intercepted by an unexpected delicacy. The Muslim woman did not take something away from him while he was sincerely trying to greet her. Instead, he was given a gift and was then very receptive to hearing the reason for which he was gifted.

The third: The same young man is approaching and the Muslim woman realizes she ran out of chocolate. As he approaches and sticks out his hand in greeting, she sticks hers out in a peace sign. ‘Can I give you a peace sign?’ she asks. ’We emphasize professional relationships through modest interactions between genders, so we love giving peace signs in place of handshakes!’ He then mimics her peace sign, giving her a peace sign in return.

Some Muslims choose not to physically interact with adult members of the opposite sex who are not blood-related to them. When meeting someone for the first time, some Muslims may choose not to shake hands. When on campus, some Muslims dodge their bodies to avoid hugs. These moments often begin with trepidation on the part of the Muslim who chooses not to engage in physical touch and they end in confusion, embarrassment and sometimes offense on the part of the person who tried to extend respect and acceptance through culturally acceptable modes of physical expression.

However, it does not have to be awkward, confusing or embarrassing! For those who choose to follow the opinions barring physical touch with unrelated members of the opposite sex, it can be a moment of great da`wah! It just needs to be done with swag.

When it comes to handshakes, instead of pulling away and taking away the shared experience of a sign of acceptance in our culture, Muslims should think of creative ways to give something in exchange in order to honor and appreciate the kind gesture.

Hand situations might be easier to intercede for those who choose not to shake them, but what about hugs? At times, in their excitement, people throw themselves on others and there is little time to back away.

Depending on the circumstance, perhaps a way to creatively deal with this in the moment is by shouting: ‘Air hug!’ As one person moves forward for the embrace, the Muslim can back away with arms wide open, meeting their attempted hug with something similar- just without touching and plenty of space in between.

At this point, the Muslim can explain that Islam encourages professional relationships between genders and as modesty is emphasized, Muslims seek ways to maintain that modesty and respect through different venues. After a couple of times, other people get the point and are able to figure out ways by which they can respect and value the concept of non-touch professional relationships.

Particularly with the air hug, some wonder if it would give the wrong message. However, it seems the communicated message actually reads: I’m off limits. However, even with those limits, I’m working within my religion to try to make sure I appreciate and honor your gesture of acceptance.

For Muslims who choose not to touch, every situation is going to be different and must be met with wisdom as Allah subhanahu wa ta`ala (Exalted is He) tells us:

Helping someone find the beauty in Islam through a Muslim’s character and actions is more commendable and righteous than causing someone to feel embarrassed or offended because of an inadequate da`wah move.

If one chooses not to engage in physical touch, they should take it upon themselves to make sure they do it in a creative and engaging manner so that those curious about Islam will find themselves even more interested, not the other way around.

Each one of us has different experiences and insight.

The above are just a few suggestions. Please share your collective wisdom on how to get real with da`wah as specifically related to inter-gender relations so we can learn from your wisdom!