Islamic teachings gave a criterion on the basis of which portions or passages from the Bible could be either accepted or rejected. This criterion has been described in the following verse of the Qur’an: 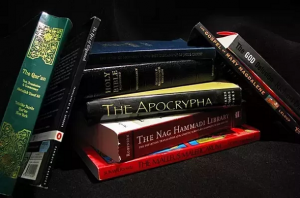 The Qur’an is the final, complete, authoritative and authentic revelation from Allah.

And We have revealed to you, (O Muhammad), the book in truth, confirming that which preceded it of the scripture and as a criterion over it…  (Al-Ma’idah 5: 48)

This verse emphasizes two main aspects of the Qur’an:

1- The Qur’an confirms only those teachings or passages of the previous scriptures which have remained intact.

2- The Qur’an is the final, complete, authoritative and authentic revelation from Allah. It is the final arbiter and the only criterion to correct any inaccuracy or misinterpretation which might have occurred in the transmission of scriptures throughout the ages.

It helps to discover, expose, and disclose human additions or interpolations of previous revelations prior to its revelation (the Qur’an).

Indeed, one of the names of the Qur’an is Al-Furqan (the criterion which distinguishes between right and wrong, truth and falsehood).

It follows, therefore, that a Muslim has no reason to reject the essence of any passage in the Bible if such a passage is confirmed by the Qur’an. For example, we read in the New Testament, a reiteration of one of the Ten Commandments:

“And Jesus answered him. The first of all commandments is hear, O Israel; the Lord our God is one Lord.” (Mark 12:29)

A Muslim who reads this passage in the Qur’an can find no objection to its essence. After all, the Qur’an confirms:

If, however, a Muslim reads in the Bible (or other previous scriptures for that matter) accusations of major moral sins levied against great prophets or doctrines which are totally negated in the Qur’an, he or she can accept only the Qur’anic version as the original unadulterated truth, revealed by Allah.

Likewise, if the Bible (or other scriptures) contain apparent prophecies about the advent of Prophet Muhammad (blessings and peace be upon him), and if the Qur’an confirms that fact, then there is nothing unusual or objectionable in referring to such prophecies.

Those who follow the Messenger, the unlettered prophet, whom they find written in what they have of the Torah and the Gospel, who enjoins upon them what is right and forbids them what is wrong and makes lawful for them the good things and prohibits for them the evil and relieves them of their burden and the shackles which were upon them. So they who have believed in him, honored him, supported him and followed the light which was sent down with him – it is those who will be the successful. (Al-A`raf 7: 157)

And (mention) when Jesus, the son of Mary, said: O children of Israel, indeed I am the messenger of Allah to you confirming what came before me of the Torah and bringing good tidings of a messenger to come after me, whose name is Ahmad. But when he came to them with clear evidences, they said: This is obvious magic. (As-Saff 61: 6)

Source: The article is excerpted from the author’s book “The Amazing Prophecies of Muhammad in the Bible Twenty seven proofs of Muhammad’s