The second dialogue supports the first one; it highlights the doctrine of resurrection. The first dialogue ensures the supreme power of Allah in initiating life and causing death to living beings; which means that the One who is able to give life to the dead is able to make them rise on the Day of Judgment. The narrative dialogue between Allah (Exalted be He) and `Uzair highlights the Divine Might on resurrection: 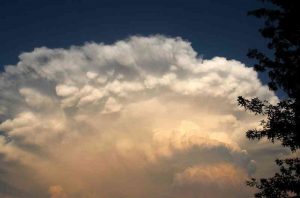 The One Who is able to give life to the dead is able to make them rise on the Day of Judgment.

Or (take) the similitude of one who passed by a hamlet, all in ruins to its roof

but Allah caused him to die for a hundred years, then raised him up (again).

He said: “Nay, you have tarried thus a hundred years; but look at thy food and thy drink; they show no signs of age; and look at thy donkey: And that We may make of thee a sign unto the people, Look further at the bones, how We bring them together and clothe them with flesh.

When this was shown clearly to him, he said: “I know that Allah has power over all things”. (Al-Baqarah 2:259)

Ishaq Ibn Bishr, reported, on the authority of Ibn `Abbas and others, that  “Ezra was a saint and a wise man. He went out one day to his own far, as was his custom. About noon he came to a deserted, ruined place and felt the heat. He entered the ruined town, dismounted his donkey, walked into a flourishing orchard and gathered figs and grapes in his basket. He went under the shade of the Khaiba tree and ate his food. Then he got up to look at what remained of the ruins. The people had long been lost, and he saw bones; therefore he wondered how would Allah ever bring it to life after death. He said this not out of doubt but out of curiosity. Allah sent the Angel of Death to take his life. He remained dead for one hundred years. After one hundred years had passed, Allah sent an angel upon Ezra to revive his heart and his eyes so that he could feel and see how Allah revives the dead.”

Through this Qur’anic dialogue, the absoluteness of Allah’s might is quite clear through  the paradox between the drink and food that can be quickly spoiled, but remained as fresh as it was one century ago when `Uzair left it, and the donkey which comparatively lives much more than food and drink, however it was not only dead but nothing remained of it except bones.

“Time is immaterial to God’s working; things, individuals and nations are subjects to laws of life and death, which are under God’s complete control, however much we may be misled by appearances”. When the angel asked Uzair: “How long didst thou tarry (thus)?”; he said “a day or part of a day.” Uzair said that, as Ali mentions: “because he knew he had slept early in the afternoon and woke up late in the afternoon”.

Likewise, `Ali adds that `Uzair ate and drank his food and did not notice any change in his food or drink which was unharmed. However, the angel said to him: “You remained asleep for one hundred years”; and before `Uzair’s eyes, Ali adds, “the bones were reunited, clothed with flesh and blood, and restored to life”. Seeing all this clearly before him, Uzair said: “I know that Allah hath power over all things.”

Sa’di (1998) considers `Uzair a divine sign that denotes the absolute Might of Allah and His ability to resurrect dead people out of graves. Thus, `Uzair has become a tangible model on resurrection in this world for believers of Allah and the Last Day.

In view of that, Ali (1934) elicited this moral: “1- Time is nothing to God; 2- It affects different things in different ways; 3- The keys of life and death are in God’s hands. 4- Man’s power is nothing; his faith should be in God.”

Humaidi (2007) sees that one of the significant dialogue procedures is varying a realistic and vivid evidence which  is  close to the claimant such as his family, himself or his property. This technique is considered one of the most effective methods in convincing a claimant or an investigator.

Dr. Ahmad Muhammad Al khalidi is Researcher and translator, E L teacher and lecturer, an old member in the presentation to Islam committee.