Prophecies of Prophet Muhammad in the Bible (Part 1)

Proof 3: That he will descend from the brothers of the Israelites, the Ishmaelites 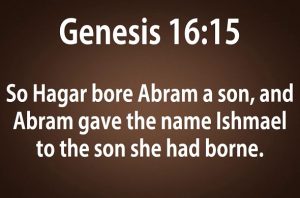 Hagar bore Abraham his first son, Ishmael (peace be upon him), (Genesis 16:15) and then Sarah bore him Isaac (peace be upon him). Ishmael became the grandfather of the Arab nation, and Isaac became the grandfather of the Jewish nation. The prophet who was prophesized about was not to come from among the Jews themselves, but from among their brothers, the Ishmaelites. (Genesis 21:2-3)

Muhammad (peace be upon him), a descendant of Ishmael, is indeed this prophet.

Also, Isaiah (42:1-13) speaks of the servant of God, His ‘chosen one’ and ‘messenger’ who will bring a law. “He will not falter or be discouraged till he establishes justice on earth.

In his law the islands will put their hope.” (Isaiah 42:4) Verse 11 connects the ‘chosen one’ with the descendants of Kedar. Who was Kedar? According to Genesis 25:13, Kedar was the second son of Ishmael, the ancestor of Prophet Muhammad (blessings and peace be upon him).13

The same verse prophesies about the ‘chosen one’, whose mission of prophethood would be for all the nations; this fits only Prophet Muhammad (blessings and peace be upon him) whose mission was for all nations, unlike the Hebrew prophets whose missions were limited to Israel:

…he will bring forth justice to the nations. He will not fail or be discouraged till he has established justice in the earth; and the coastlands wait for his law… Let the desert and its cities lift up their voice, the villages Kedar inhabits.

Proof 4: God (Allah) will put His words in the mouth of this prophet, and he will declare what God commands him.

Allah, the Almighty, sent the Angel Gabriel (peace be upon him) to teach Muhammad the exact words he should repeat to the people. The words are, therefore, not his own; they did not come from his own thoughts.

Instead, they were put into his mouth by the angel. To clarify, a teacher is teaching a language to a student; if he asks him to read or repeat after him, is he not putting these unheard words of a foreign tongue into his student’s mouth?

In an identical manner, the words of the Qur’an were revealed.

History tells us that Muhammad (peace be upon him) was forty years of age. He was in a cave some three miles north of the city of Makkah. It was the 27th night of the Islamic month of Ramadan. In the cave, the arch-angel Gabriel commands him in his mother tongue: iqra’ which means read, proclaim, or recite!

Muhammad is terrified and, in his bewilderment, he replies that he is unlettered. The angel commands him a second time with the same result. For the third time, the angel utters the same command.

Now, Muhammad (peace be upon him) grasps that what is required from him is to repeat and to recite, and he repeats the words as they are put into his mouth:

Recite in the name of your Lord who created – created man from a clinging substance. Recite, and your Lord is the most Generous – Who taught by the pen – taught man that which he knew not. (Al-`Alaq 96:1-5)

As soon as the awesome angel departed, Muhammad (peace be upon him) rushed back home, shaking in fear and sweating all over. He asked his beloved wife, Khadijah (may Allah be pleased with her) to cover him up. He lay down, and she remained by him, calming him down and comforting him. When he had regained his composure, he explained to her what he had seen and heard.

She assured him that Allah would not allow any terrible thing to happen to him. During the next twenty-three years of his life after being given the prophethood, words were ‘put into his mouth’ in the same way, and he uttered them. These words (verses) made an indelible impression on his heart and mind, and as the volumes of the sacred scripture (the Qur’an) grew, they were recorded on palm leaves, on skins and on the shoulder-blades of animals as well as in the hearts of his devoted disciples.

The words (revelation) were actually put into his mouth exactly as foretold in the prophecy under discussion, “and I will put my words in his mouth.” (Deut. 18:18) In a similar quote from John 16:13, Jesus (peace be upon him) says, “When the Spirit of Truth comes, he will guide you into all the truth, for he will not speak on his authority, but whatever he hears he will speak.”

Also, Jesus (peace be upon him) foretold that the “Paraclete” to come after him was one who, “shall not speak of himself, but whatsoever he shall hear, that shall he speak.”

As a scholar of comparative religion has said: Neither the content of the revelation, nor its form, were of Muhammad’s devising. Both were given by the angel, and Muhammad’s task was only to repeat what he heard.