Dr. Jerald F. Dirks, a former ordained minister in the United Methodist Church and a graduate of Harvard University School, has embarked on an interfaith study of three religions: Islam, Christianity and Judaism. 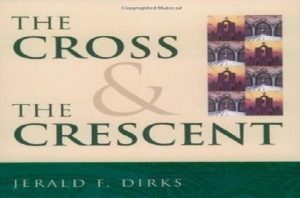 Dr. Jerald F. Dirks book ‘The Cross and the Crescent’ in which he dedicated a chapter to a fair analysis of the scriptures of each religion.

The study came out in his book ‘The Cross and the Crescent’ in which he dedicated a chapter to a fair analysis of the scriptures of each religion. In this book, he explains that the Torah‘s composition of five Biblical books, together known as the Pentateuch, is more than likely an outcome of frequent cut-and-paste compilations whose material‘s provenance is undated and unidentifiable.

Dr. Jerald expresses such cut-and-paste processes in a tone of dissatisfaction with the multitude of books making up the Torah and the New Testament.

A provocative study which analyzed the authenticity of the Christian Scriptures is that of Dr. Maurice Bucaille, a French scientist and winner of the French Academy Award. Bucaille shows how such Scriptures were treated like laboratory specimens, subjected to all sorts of experimentation. He says:

“The Church has made incisive cuts in the profusion of books relating the life and teachings of Jesus.”

Yet, many Christians, upon reading the Gospels, wonder why they feel ―embarrassed and even abashed when they stop to think about the meaning of certain descriptions (in the Gospels), says Bucaille who concludes:

Biblical scholars who have reached similar conclusions are quoted by Arthur Watham, in his article: The Bible in the New Light. Watham cites biblical scholars who do not “hesitate to say of the opening chapters of Genesis, which record the creation of the earth, of man, and the beginning of human progress, that these chapters present no account of the real beginnings”, for they contain statements “inconsistent with what is independently known of the early history of the earth, and of mankind upon it”

These critical conclusions about the Bible’s authenticity did not only circulate among the professional elite, but were also broadcasted to the wider populace. On November 10, 1897, Rev. Chancellor Lias, in a correspondence to The Guardian, wrote, “it becomes ever more clear to the Bible student that there is a large human element in Scripture”.

The fact that Christian scripture has suffered human tampering, not only explains the many discrepancies between the old and new Testaments, but also explains why such discrepancies exist in the first place. Rev. G.H. Richardson, from Bunker Hill, Illinois, reveals disturbing facts about the Bible:

“It cannot be questioned that many pagan as well as uncritical Jewish ideas are attached to our views of the Bible. When the Christian church took over the Old Testament it took too many Jewish and pagan theories with it, and these have too long been hanging like a millstone round the neck of Biblical studies”.

Along the same vein Dr. Gary D. Guthrie, a world authority on comparative religion, who explains why many contradictions exist not only between the old and new Testaments but also among the four Gospels, writes:

“The writers of the Christian Gospels, as well as the compilers, were pressed to please too many bickering factions (Gnostic, Pauline, and Pertine, to name just the major ones). This is the reason that many contradictions, such as a kingdom of this world and not yet of this world, existed”.

We finally turn to Thomas Paine, who confirms what has been quoted so far:

“Had it been the object or intention of Jesus Christ to establish a new religion, he would undoubtedly have written the system himself, or procured it to be written in his life-time, but there is no publication extant authenticated with his name. All the books called the New Testament were written after his death”.

What about Buddhism and Hinduism? Have they spared the discontent of their own followers? Jawaharlal Nehru – the first prime minister of independent India (1947-64) – cast doubt on the nature of Hinduism. In The Discovery of India he candidly says:

“Hinduism, as a faith, is vague, amorphous, many-sided, all things to all men. It is hardly possible to define it, or indeed to say definitely whether it is a religion or not, in the usual sense of the word. In its present form, and even in the past, it embraces many beliefs and practices, from the highest to the lowest, often opposed to or contradicting each other.”

“Frankly speaking, it is not possible to say definitely who is a Hindu and what Hinduism is. These questions have been considered again and again by eminent scholars, and so far no satisfactory answer has been given. Hinduism has within itself all types of religions such as theism, atheism, polytheism and so forth…Its conflicting philosophies will confound any ordinary person”.

Like Hinduism, Buddhism had its own problems. From the beginning, Gautama Buddha, the founder of Buddhism, taught an unnatural form of religiosity, one that proved hostile to both life and human nature. Charles Seignobos explains:

“To live is to be unhappy, taught Buddha. Every man suffers because he desires the goods of this world, youth, health, life, and cannot keep them. All life is a suffering; all suffering is born of desire. To suppress suffering, it is necessary to root out desire; to destroy it one must cease from wishing to live, ‘emancipate one’s self from the thirst of being’. The wise man is he who casts aside everything attached to this life…one must cease successively from feeling, wishing, thinking”.