Since people are often at a loss as to how they should go about giving da`wah, and use their ignorance as an excuse not to do anything, the following list of more than eighty suggestions have been compiled from among the many possible ways to give da`wah in order to make the way easier: 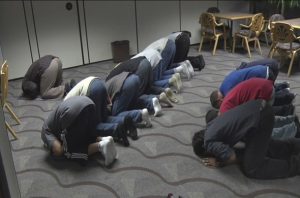 Establish congregational prayer in the office or invite co-workers to accompany you to the nearby mosque.

1- Household library. Prepare a collection of books, magazines and tapes according to what is suitable for the various age groups (with consideration of what are suitable for all the members of the family).

2- Posters. Make a bulletin board for the home on which announcements for Islamic lectures and events can be posted in order to remind the family of important events and lectures.

3- Family lessons. Read from a book, listen to a tape or memorize a portion from the Qur’an and Hadith together as a group.

4- Family Competitions. Engage family members in Islamic competitions and maybe the prize is writing the winner’s name on the honor roll in the house).

5- Family Magazine. Create a family magazine by having family members participate writing essays or in cutting articles and pictures related to Islam from the magazines and newspapers which you bring home.

6- Participation in Islamic Social Work. Have your brother or son accompany you to the prayers, lectures or to visit a sick person or a scholar or the offices of da`wah.

7- Righteous Acts in Public. Do some righteous acts in front of the family, such as prayer, reading Qur’an and giving charity, as an example for them to learn from.

8- Participation in the Wall Magazine. In most mosques there are bulletin boards at the back with announcements and Islamic posters. Contribute articles to the board and purchase beneficial and informative posters for it.

9- Development of the Mosque’s Facilities and Programs. Participate in developing the mosque’s da`wah facilities and activities such as its library, Qur’an memorization classes and its contribution’s box.

10- Providing Books and Tapes. Collect good books, booklets, pamphlets and tapes from Islamic charitable organizations and put them in various locations in the mosque.

For example, it is possible to place the literature in the Qur’an shelves and in particular the Qur’anic commentaries and their translations in different languages.

11- Advertisement for Mosque’s Programs. Announce the topics and timings for new lectures and classes in the mosque and post advertisements for them on the bulletin boards and on the doors of the mosque.

12- Lectures. Invite a good lecturers know to you to give lectures at the mosque or contact organizations like the Awqaf or other da`wah organizations to provide lecturers for your local mosque on a regular basis.

13- Translation of Friday Khutbah (Sermon). Arrange with the Awqaf for the translation of the Friday sermon into the languages of the majority of those who attend Jumu`ah (Friday Prayer) in your local mosque.

14- Mosque Committee. Participation in the mosque’s committee which organizes the mosque’s da`wah programs and its and social activities.

17- Drama Activities. Participate in the drama activity in the school by developing Islamic plays and themes.

18- Lectures. Arrange for the visits of various speakers and callers to the school. Focus on open forums in which students are able to ask the questions which are most important to them, thereby making Islam seem more relevant.

19- Competitions. Organize Islamic and academic educational competitions between the students and schools and distribute Islamic prizes. Use such occasions as a means to talk about the importance and responsibility of da`wah.

20- Facilitating Student Input. Collect students’ suggestions and complaints and present them to the school authorities. Give full support to student opinions on important issues, especially those related to Islam.

21- Islamic Library. Help the Islamic studies department to develop a strong and varied section for Islam in the school’s general library. Focus on Islamic novels and stories of the Companions and others.

22- Exhibitions and Expositions. Participate in book and tape exhibitions or antidrug expositions, etc. which are officially organized by the school.

24- Summer Holidays. Introduce Islamic content in the summer vacation activities of the school.

At the Work Place

25- Da`wah Posters. Put up da`wah posters and announcements for Islamic events on the office’s bulletin boards.

26- Your Desk. Keep da`wah material on your desk at all times, among your books, in a rack as well as on your own bulletin board.

28- Invitations. Invite interested co-workers to lectures and other Islamic events, as well as to visit Islamic da`wah offices.

29- Congregational Prayer. Establish congregational prayer in the office or invite co-workers to accompany you to the nearby mosque.

32- Islamic Projects. Gather other active Muslims in the office to initiate Islamic charitable projects on your job.

33- The Islamic Example. Do your job to the best of your ability at all times as a good Islamic example to your co-workers.