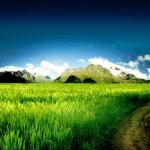 Allah commands Muslims to treat other people kindly provided they do not manifestly declare malice towards them and to think well of all of people alike.

We know that Islam secures freedom of belief. This is clear from many Qur’anic verses, but did Prophet Muhammad really force people to become Muslims? If not, then why did he fight non-Muslims?

The principle underlying the relationship between Muslims and non-Muslims is coexistence. Allah commands Muslims to treat other people kindly provided they do not manifestly declare malice towards them and to think well of all of people alike. A person who thoroughly explores the verses of the Noble Qur`an will find that, in its entirety, it presents an integrated Qur’anic methodology concerning the treatment of non-Muslims.

It is noteworthy to mention that the variation in the manner of treating non-Muslims does not stem from a methodological inconsistency; rather, it depends on the different attitudes of the people we deal with. People are different (with respect to behavior) and thus they must not be judged alike. It is considered a methodical injustice to generalize what has been made specific or to specify what has been left general in legal texts.

There are many verses in the Qur’an, whether those revealed in Makkah or Madinah, that urge Muslims to be tolerant towards others and to treat them kindly. These include:

So pardon and overlook until Allah delivers His command. Indeed, Allah is over all things competent. (Al-Baqarah 2:109)

There shall be no compulsion in (acceptance of) the religion. The right course has become clear from the wrong. So whoever disbelieves in Taghut (false deities) and believes in Allah has grasped the most trustworthy handhold with no break in it. And Allah is Hearing and Knowing. (Al-Baqarah 2:256)

Allah does not forbid you from those who do not fight you because of religion and do not expel you from your homes – from being righteous toward them and acting justly toward them. Indeed, Allah loves those who act justly. (Al-Mumtahanah 60:8)

The above verses from Surat Al-Baqarah and Al-Mumtahanah were revealed in Madinah and all of them exhort Muslims to be kind and merciful to their fellow men.

As for the legal texts, Qur’an and Sunnah, that command Muslims to be harsh towards some people, they can be compared to the previous verses as two integrated methodologies that deal with two different types of people:

The first methodology, which is the general case, enjoins Muslims to treat all people with kindness through dialogue and respect of freedom (of faith). This is the correct basis for inviting others to Islam; this does not abrogate a Qur’anic verse nor has it been abrogated though some jurists claim the contrary. Allah Almighty says:

And speak to people good (words) and establish prayer and give zakah. (Al-Baqarah 2:83)

In another verse, Allah instructs those who call others to His way on how they should invite others according to the different types of people:

Allah says about the People of the Book:

And do not argue with the People of the Scripture except in a way that is best, except for those who commit injustice among them, and say, “We believe in that which has been revealed to us and revealed to you. And our God and your God is one; and we are Muslims (in submission) to Him. (Al-`Ankabut 29:46)

The second methodology is concerned with those who attack Muslims, in which case it is necessary to defend oneself even in a harsh manner. Allah Almighty says,

Unlike the policy followed by some countries, Muslims do not treat others based on whether they are with or against them. Rather, Islam teaches its followers that people are different and must therefore be treated accordingly with respect to time and type of person.

Based on the above, one can understand the hadith which exhorts fighting non-Muslims until they testify that there is no god but Allah as fighting the aggressors who attack Muslims and not people in general. It also means that Muslims must merely deliver the message of Islam to them and not compel them to embrace the faith as per the words of Allah Almighty Who says:

Fight them until there is no (more) temptation (fitnah) and (until) worship is (acknowledged to be) for Allah. But if they cease, then there is to be no aggression except against the oppressors. (Al-Baqarah 2:193)

In the hadith mentioned above, the Prophet (peace be upon him) refers to the apostates led by Musailamah who attempted to destroy the Islamic state and deviate from its general order. This was clearly a case of high treason, a charge that carries the death penalty according to penal codes and international laws.

The same applies to the above noble verse which speaks about a group of oppressors who share the same abominable characteristics. At that time, the Romans started to mobilize armies to fight the Prophet. The Muslims did not fight them except after they learned that the Romans wanted to abolish the Islamic state.