If we cast a glance at the world atlas, we find that no other country could have been more suitable than Arabia for the much-needed world religion. It is situated right in the middle of Asia and Africa, and Europe is not far away. 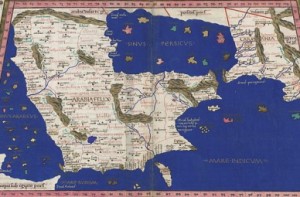 Great nations of the world had long been struggling for world supremacy; as a consequence they had exhausted their resources and vitality.

At the time of Muhammad’s (blessings of Allah and peace be upon him) appearance central Europe was inhabited by civilized and culturally advanced nations; these people were about the same distance from Arabia as were the people of India.

Look at the history of that era, too, and you will find that no other people were more suited to be endowed with this Prophet than the Arabs. Great nations of the world had long been struggling for world supremacy; as a consequence they had exhausted their resources and vitality.

The Arabs were a fresh and virile people. So-called social progress had produced bad habits among the advanced nations, while among the Arabs no such social organization existed, and they were, therefore, free from the inactivity, debasement and decadence arising out of luxury and sensual satiety.

The pagan Arabs of the fifth century had not been affected by the evil influence of the artificial social systems and civilizations of the great nations of the world. They possessed all the good human qualities of a people untouched by the ‘social progress’ of the time. They were brave, fearless, generous, faithful to their promises, lovers of freedom and politically independent – not subject to the hegemony of any of the imperial powers.

There were also certain undesirable aspects of their life as well, as we shall mention later on, but the reason for this was that for thousands of years no prophet had risen among them, nor had there appeared a reformer who might have civilized them and purged their moral life of its impurities.

Centuries of free and independent desert life had bred and nourished extreme ignorance among them. They had, therefore, become so fixed in their traditions of ignorance that to humanize them was beyond an ordinary man.

At the same time, however, if some person of extraordinary powers were to give them a noble ideal, they would readily rise to act for the achievement of such an ideal. They would be prepared to face the hostility of the entire world in the cause of their mission. It was just such a young, forceful and virile people that was needed to disseminate the teachings of the world Prophet, Muhammad (peace be upon him).

Take also the Arabic language. The more you study its literature, the more you will be convinced that there is no other language more suited to express high ideals, to explain the most subtle aspects of divine knowledge, and to impress the heart of man and mold it into submission to God.

Small phrases and brief sentences express a whole world of ideas; they are so powerful that their very sound can move men to tears and ecstasy. They are so sweet that it is as if honey were being poured into one’s ears; they are so full of harmony that every fiber of the listener’s body is moved by their symphony. It was a rich and powerful language such as this that was needed for the Qur’an, the great Word of God.

It was, therefore, a manifestation of God’s great wisdom that He chose Arabia as the birthplace of the world Prophet. Let us now see how unique and extraordinary was the blessed personality chosen by God for this mission.