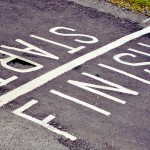 When you’ve done that, move on to the next thing, do that to completion and without interruption and yes, don’t move on until it’s finished.

If there was a worse invention in old-school ‘time management’ babble than the idea of ‘multitasking’ I’d love to know.

Multitasking was long heralded as the ultimate badge of honor for a knowledge worker. You’re good if you’re getting things done, but you’re more efficient if you’re multitasking and doing two things at once.

Let’s be clear about what people are actually talking about when they use the term ‘multitasking’. Multitasking is really about juggling two or more actions at the same time and requires your brain to switch into one thing, make a small amount of progress, switch to the next thing, react to something else, come back and make minimal progress on the first thing again, switch to a new thing and soon.

In trying to manage our attention in this way – or more accurately, falling into the trap of letting our attention be used in this way! – we expend a lot of energy and attention on the costly mental setup time (“Where was I again?”) and creating constant drag away from actual doing and completion.

If anyone tells you they’re great at multitasking, what they’re really telling you is that they don’t have their full attention on what they’re doing! They’re high on feeling busy but if you actually observe their output, you’ll see there are easier ways.

The possible exception when it comes to multitasking could be working mums. I don’t know for sure because I’ve never been one. But the idea of taking an important work call at the same time as breastfeeding your child seems like a pretty good example of where multitasking is possible. The clear distinction here is that only one of those tasks requires mental energy, so in effect the body might be multitasking but the brain is not!

I once had someone in one of my workshops who completely disagreed with me about this. She was a classic professional multitasker and she reveled in this identity. As I approached her desk, I asked her to show me her emails. She had a bulging inbox amongst the largest in the company and then nine separate windows open on the screen. In each of those nine windows was yet another incomplete email. She looked at me and smiled.

A much better idea is ‘mono-tasking’. Once amongst the most unfashionable words in the business lexicon, it should be celebrated. Let’s raise a toast to mono-tasking, the art of doing one thing to its natural conclusion and without interruption. When you’ve done that, move on to the next thing, do that to completion and without interruption and yes, don’t move on until it’s finished.

Regular and sustained mono-tasking is like putting cherries on cakes. You feel more present in your work, more engaged, calmer and more at ease with the world around you. That world might feel like it’s burning with urgency, noise, panic and stress but you’re locked in a kind of cocoon. You’re quietly doing what a Ninja does best: you’re shipping and clarifying, completing and organizing – one thing at a time.

Multitasking is somewhat of a default mindset in the cultures of many of the big companies we work with. This is more out of chaos than conspiracy – it has simply evolved as the various forms of technology and the main components of knowledge work have developed. You may recognize your own working environment as being full of interruptions and noise: pressured, challenging, open and frustratingly frenetic. There may be little you can do to change this.

What you can do is recognize that perhaps your best proactive attention work might need to take place outside of this location. It’s a mystery to me why some bosses are so closed off to this idea – perhaps as if raising an idea that might boost your productivity and lower your stress levels is in some way only meant as an indictment to the company’s current working environment. Or worse still, they’d have to trust you!

If you have a boss like this, I sympathize. You might need to get into stealth mode and choose your moments to ‘break the rules’. Sneaking off to a meeting room to get some calm thinking time so that you can do your job better or clear a backlog should hardly be considered a crime.