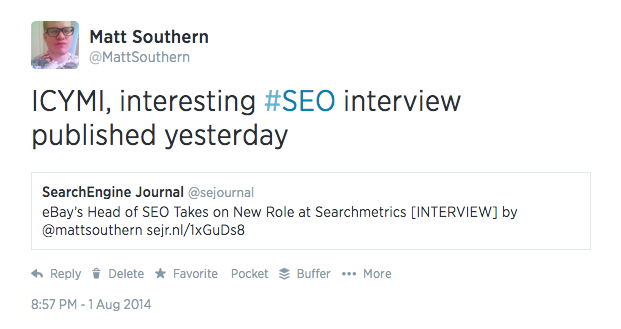 The links aren’t immediately clickable, so if someone’s embedded tweet looks interesting you have to click on it to expand it. Twitter’s desktop app, TweetDeck, doesn’t appear to be supporting this feature yet. As of now it’s only available on the iOS and Android apps, and Twitter.com.

There’s no feature I’m aware of that simplifies the process of embedding a tweet, you have to manually copy and paste a link to the tweet in order to embed it.

What I particularly like about this feature is that it’s almost like another way to retweet something, but you have much more room to add your own comment. The embedded tweet only takes up as many characters as a shortened link would, which means you have over 100 extra characters to add your own message.

Another nice part about this feature is that when you embed someone’s tweet, that person receives a notification. It’s also fun to note that if you embed a tweet with an embedded tweet into another new tweet, they all link together in a chain of tweets.

If this feature catches on, then I look forward to seeing it roll out to more apps eventually. Will this end up being the new re tweeting?