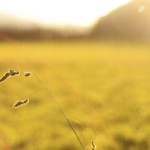 To speak about God, the creation, the destiny is to give a new life a feeling which has been forgotten or seemingly dead.

Every one of us knows the meaning and the importance of Da’wah especially in the West; we understand that it is the duty of every Muslim to explain what Islam is and to invite people to learn about Islam. Every member of the Ummah has to bear witness to the truth before all mankind as Allah says in the Qur’an:

Bearing witness is what we have to do and especially in the West, where many of the people living in a secular society have forgotten the meaning of faith and religious practice, and hardly think of or speak about God.

But first, following the example of the Prophet, we should start with our families, our relatives, and ourselves:

And warn (whomever thou canst reach, beginning with) thy kinsfolk. (26:213)

This means that each of us, man and woman, brother and sister, must first pay attention to what is going on in his/her own family and between his/her relatives. This is the first space for ada`wah that is based on love, knowledge and good example. It makes no sense to go around speaking about Islam when our own children are left abandoned and lost. We know that, of course, but still it remains important to be reminded.

I want today to focus on both the fundamental principles and the methodology of Da`wah as a reminder so that we can ponder over this issue in our day-to-day life. Let us first speak about two major principles that we must not forget when we are speaking about Da`wah:

Back to the Truth

First:To speak about Allah, Islam, iman, and truth is by no means to speak about something new, even when we are speaking with some European people who seem to know nothing about Islam.

Yes, they may have no idea about the Islamic way of life, but deep in their hearts, sometimes without being aware of it, the knowledge-the intimate feeling of tawheed(Oneness of God) is written. This is what we find in the Qur’an:

And whenever your Sustainer brings forth their offspring from the loins of the children of Adam, He thus calls upon them to bear witness about themselves: Am I not your Sustainer? To which they answer: Yea, indeed, we do bear witness thereto. Of this we remind you lest you say on the Day of Resurrection, ‘Verily we were unaware of this’.(Al-A`raf7:172)

The original state of the human being is to believe in the Oneness of God, while to deny it is abnormal, something like a disease. This is why we read in the Qur’an, of those who denied this: “God has sealed their hearts”, “In their hearts is disease”. (Al-Baqarah2:68)

Thus to speak about God, the creation, the destiny is not to speak about something new but, on the contrary, to awaken, to give a new life to a feeling which has been forgotten or seemingly dead. Allah says:

O you who have attained to faith, Respond to the call of God and the Apostle whenever he calls you unto that which will give you life and know that God intervenes between man and his heart.(Al-Anfal8:24)

Our call adds nothing to our nature, our call gives life, awakens people and makes them aware of something their hearts have known but have forgotten. This must influence our way of speaking and dealing with people for we try to lead them back to the origin and not to a new and original knowledge. In Islam, to call is to recall.

..And to the Origin

Second: We must never forget the existence of a bond of brotherhood between all the human-beings. We are from the same origin and Allah says in the Qur’an “O men!” addressing all mankind for we are all ‘sons of Adam’ (bani Adam).

As such we should develop in our heart affection towards every man and woman even if they are not Muslims. Even if they do not know it, they still are signs of the greatness of Allah and our brothers/sisters.

We must like what they are even if we refuse and dislike what they do. With this state of mind we become able to change our way of speaking to them and avoid being judges and become genuine callers, du`at.

A well-known hadith quoted by Muslim and Bukhari says “None of you perfects his belief – or truly believes-until he wishes for his brother what he wishes for himself”. (Al-Bukhari& Muslim))

To be a da`iyah in the West requires that we avoid this conflicting attitude in order to present Islam as a reminder, a message of brotherhood, of love and hope. These are not simply words, but the genuine manifestation of a state of mind, of a state of heart.