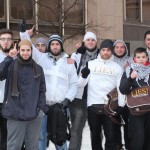 The da`i is the person who is basically calling people to Islam, conveying the message, and trying to teach the people and help them to apply Islam.

When Muslims talk about Islamic Da`wah, or inviting people to the way of Islam, they are basically talking about three different stages of promoting Islam. The first is inviting people to Islam by conveying the message. That is only one stage, which is followed by teaching Islam to the people who accept the message. And the third stage is actually helping people to implement Islam in their lives.

So when I talk about da`wah in this post, I am referring to all three of these stages collectively, and not only the first (as many people perceive). Therefore da`wah is not directed only to non-Muslims but to Muslims as well, at various levels of knowledge and iman (faith).

This almost seems like a common sense breakdown, but is useful when trying to understand and analyze the concept of da`wah and methods of it. Of the three pillars of da`wah, the first is the caller to Islam, or the da`i. The second pillar is the audience of the message, the people who are being called to Islam. And the third pillar is the message itself, what the da`i is calling to; Islam.

Although I’m reluctant to use this analogy, the pillars of da`wah can be likened to sales, where there exists a salesman, a buyer, and a product being sold. It’s a useful analogy, but I don’t like thinking of Islam as being literally ‘sold’, especially as salesmen (analogous to the da`is) are often considered to be liars in this culture. Or maybe it’s just that I have a bad experience with salesmen. Anyway, these are the three essential pillars of da`wah.

Now, as was mentioned above, the da`i is the person who is basically calling people to Islam, conveying the message, and trying to teach the people and help them to apply Islam. The first da`i or messenger was Nuh (Noah, peace be upon him), and the first da`i in our Ummah was Muhammad (peace be upon him).

Because the da`i is calling to Allah, he is in the highest and most honorable role, and is promised a great reward. But in order to be an effective da`i, there are essential characteristics, even required attributes which a person must possess- they have been summarized here into twelve characteristics (or requirements) of an effective da`i.

The first essential characteristic mentioned is to have a strong faith or belief in what the da`i is calling to, which is Islam.

The second characteristic is to have a good relationship with the One to whom the da`i is calling, Allah (Exalted be He). This characteristic can be broken down into two parts: sincerity, and love.

Ikhlas means sincerity, and the da`i must be pure in his intentions. He should be worshiping Allah with sincerity and purity, and not be maintaining what could be called merely a superficial relationship. It should be sincere.

Love for Allah is the second part, and a da`i should love Allah in his heart in order to be an effective da`i or even a strong Muslim. There are ways to cultivate love for Allah which can be reviewed in my post entitled loving Allah.

A person calling to Islam should also have strong, solid knowledge of what he is calling to, which means the da`i should know Islam, and also know why Islam is better than any alternative paths.

The da`i must also implement what he calls for, as it is not appropriate to call people to do what he himself cannot apply in his own life. Sometimes this is called ‘practicing what you preach’. It is very important for the da`i to implement Islam in his own life before calling others to it.

The da`i should have awareness of basically three principles:

Awareness of the reality of da`wah in his lifetime and place, such that he knows the means of giving da`wah in his particular circumstances and time.

Awareness of the reality of the condition of the people he is calling to Islam, such that he understands their experience and their options.

Awareness of his personal capabilities, as a person cannot give da`wah beyond his capabilities so he should be aware of his own limits.

Wisdom in the way of da`wah means that a da`i can give the message gradually, at the level which people are able to understand. Giving them more information than they can grasp will lead to more confusion and fitnah, so it is better to give people only what they are capable of understanding. We can see of course that the message of Islam was delivered gradually, for over two decades, as the people were able to progress in their understanding and iman.

8- Giving Muslims the Benefit of the Doubt

The da`i should give the Muslims the benefit of the doubt, and respect, because if he doesn’t, people will always have the worst interpretation of a person’s actions. The da`i needs to show respect so that people will open their hearts.

9- Covering the Faults of People

When a doctor treats a patient, there is a strict rule of confidentiality, which is essential for a patient to be able to trust his physician. He needs to trust that the doctor will not reveal the person’s shortcomings and weaknesses to others. Similarly, the da`i should cover people’s shortcomings so that they are able to trust him, not fearing that he will reveal their flaws to their friends or community.

This implies that the da`i gives everyone the respect which is due to their position, which means respect the scholars, the elderly, and people who have been given authority. This way the disrespect will not block the truth from reaching their minds.

We have an example of this behavior in the Prophet who at the conquest of Makkah said that anyone inside Al-Haram or staying in their homes would be safe, as well as anyone staying in the House of Abu Sufyan, this showed respect to Abu Sufyan.

Now it’s important to note that just because a person might not have all of these characteristics doesn’t mean he cannot be a da`i, it just means that he won’t be as effective, and perhaps that he is not giving da’wah correctly.

So what a da`i should do if he finds himself lacking in any of these attributes, is to improve himself. If he has bad manners, he should improve his manners. If he lacks knowledge, he should acquire knowledge. And if he has been accusing Muslims instead of covering their faults then he should try to give them the benefit of the doubt.

To give da`wah is to be on the sabil or way of the Prophet Muhammad, as Allah says in the Qur’an:

Say, ‘This is my way; I invite to Allah with insight, I and those who follow me. And Exalted is Allah; and I am not of those who associate others with Him’. (Yusuf 12:108)

So may Allah make us among those who follow this Sunnah of our beloved Prophet and increase in those attributes where we are weak.

2 thoughts on “How to Be an Effective Da`i”

May Allah guide us all to guide others to this beautiful religion of Islam.