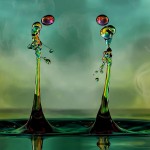 Belonging to God, he was nobody’s possession; he simply offered his love to all.

Throughout the twenty-three years of his mission, Prophet Muhammad (peace be upon him) sought the way to spiritual freedom and liberation. He received revelation, step by step, in the midst of the circumstances of life, as if the Most High was conversing with him in history, for eternity.

The Prophet listened to Him, spoke to Him, and contemplated His signs day and night, in the warm company of his Companions or in the solitude of the Arabian desert. He prayed while the world of humans was asleep, he invoked God while his brothers and sisters despaired, and he remained patient and steadfast in the face of adversity and insult while so many beings turned away.

His deep spirituality had freed him from the prison of the self, and he kept seeing and recalling the signs of the Most Near, whether in a flying bird, a standing tree, falling darkness, or a shining star.

Muhammad was able to express love and spread it around him. His wives were gratified by his presence, tenderness, and affection, and his Companions loved him with an intense, profound, and extraordinarily generous love. He gave and offered his presence, his smiles, his being, and if a slave happened to address him or wanted to take him to the other end of the city)’, he went, he listened, he loved.

Belonging to God, he was nobody’s possession; he simply offered his love to all. When he gave someone his hand, he was never the first to draw it back, and he knew what light and peace can surge in the heart of a being who is offered a tender word, an affection ate name, comfort. Freed from his own self, he neglected nobody’s self. His presence was a refuge; he was the Messenger.

He loved, he forgave. Every day he begged God to forgive his own failings and oversights, and when a woman or a man came to him burdened with a mistake, however serious, he received that soul and showed her or him the way to forgiveness, solace, dialogue with God, and the Most Gentle’s protection. He covered other people’s mistakes from the sight of others, while teaching everyone the need for personal rigor and discipline.

When laziness moved anyone to ask him for minimal practice, he always answered positively and invited them to use their intelligence and their qualities to understand, improve, and free themselves from their own contradictions while accepting their own fragility. He taught responsibility without guilt and adherence to ethics as the conditions for freedom.

Justice is a condition for peace, and the Prophet kept insisting that one cannot experience the taste of equity if one is unable to respect the dignity of individuals. He set slaves free and recommended that Muslims pledge to do so constantly: the faith community of believers had to be a community of free beings.

Revelation showed him the way’, and, as we have often seen, he never ceased to give particular attention to slaves, the poor, and the lowly in society. He invited them to assert their dignity, to demand their rights. and to get rid of any feeling of inferiority; the message was a call for religious, social, and political liberation.

At the close of his mission, in the plain lying at the foot of the Mount of Mercy (Jabal Ar-Rahmah), men and women of all races, cultures, and colors, rich and poor, were present and listened to this message, which stressed that the best among people are so through their hearts, which are determined neither by class nor by color or culture.

“The best among you is the best toward people,” he had once said. (At-Tirmidhi and Abu Dawud)

In the name of human brotherhood- addressing not just Muslims but all people (an-nas), as he did during me farewell sermon, he taught each conscience to transcend the appearances that might hinder its progress toward the Just (Al-`Adl). In the presence of God, nothing could justify discrimination, social injustice, or racism.

In the Muslim community, a black man called the believers to prayer, and a slave’s son commanded the army; faith had freed the believers from judgments based on deceptive appearances (linked to origin and social status) that stimulate unwise passions and dehumanize them.

The article is an excerpt from the author’s book “In the Footsteps of the Prophet: Lessons from the Life of Muhammad, Oxford University Press (2007).