Moses (peace be upon him) whose description has been given in Surat Al-Qasas in detail and in some other chapters in brief, was enjoined with the task of ‘inviting’ the people to the way of Allah and, in addition, the liberation of Bani Isra’il. 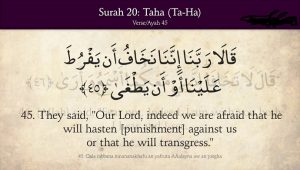 The Strivings of the Powers of Faith and Heart

Both these tasks needed a lot of effort and striving. The job of conveying the truth requires hard work, immense faith and reliance on Allah; and the liberation of a community is not easy either. It also demands a hard struggle. Moses was a bit hesitant on account of these difficult tasks which were entrusted him.

The Qur’an has also mentioned the mental attitude of Moses in his own words:

Fir`awn (Pharaoh) also reminds him of the same incident:

And you did that deed which you did, and you were one of the ungrateful ones. (Ash-Shu`araa’ 26: 19)

This fear had created hesitancy in the mind of Moses. But Allah had chosen him for both these onerous tasks because there was no better and more suitable person than him.

The Qur’an has described very clearly how a messenger of Allah, a wise teacher, aware of the complexity of the problem, presents his message with dignity and with zeal for the faith.

Moses (peace be upon him) was a true prophet and an exemplar for his entire Ummah. The way the prophets shows that they are the elect of Allah chosen for the service of His way. Their mode of talk and way of address is different from those professionals who become obsequious and compliant.

The Most Beloved Person Goes to the Most Detestable

It is worth noting here that Allah bestowed prophethood on Moses (peace be upon him) and thus he became a beloved person and a true prophet. But where and to whom was he being sent? To his enemy and the enemy of Allah.

The most beloved person was being sent to the most hated man – both stood poles apart having divergent views. We would not find anywhere else such a wide difference between persons as we find here. The most senior messenger of his time was being sent to a person who had challenged Divine Power.

Fir`awn had challenged the Might of Allah and he had become so audacious that he had made the claim:

Moses was sent to a person who was not only an infidel, but who had claimed Godhood, who was a wrongdoer and an accursed man. The most beloved person was being sent to such a hated man and he was advised:

Is any harshness or sourness visible in this advice? There could be no excuse because it was difficult for anybody to outdo Fir`awn in disobedience and insolence, as he had said, “I am your lord, the highest.” (An-Nazi`at 79:24) But when an occasion arose to send a Messenger to him, Allah advised Moses to use a mild tone. When Moses was commanded to go along with Harun (Aaron) (peace be upon them both) to the court of Fir`awn and declare the truth, they said:

Because there was a mark against Moses which created some anxiety in him, Allah said to him:

Fear not, I am with you both, I hear and I see. So go to him and say: ‘We are two messengers of your Lord. So let the Children of lsra’il go with us, and do not torment them. We bring you a sign from your Lord. And peace will be for him who follows the guidance. It has been revealed to us that the punishment will be for him who denies and turns away.’ He (Fir`awn) said: ‘Who then is the Lord of you two, Musa?’ He said: ‘Our Lord is He Who gave everything its nature, then guided it aright.’ (Ta-Ha 20:46-50)

The Poisonous Arrow of Fir`awn

The mind of Fir`awn started working fast and he took out such a poisonous arrow from his quiver which never misses – an arrow which, if aimed at the most intelligent and experienced public speaker, would have its desired effect. The public speaker may be an accomplished scholar, he might have studied the art of discourse or be an expert in psychology, sociology or logical disputation, but he is certain to be hit by this arrow. Fir`awn asked:

It was an uncommon question of his cunning mind and showed the perverse intelligence of Fir`awn. He wanted to inflame the sentiments of the courtiers against Moses and thus get rid of him. He wanted to kill two birds with one stone. One: that he might sidetrack the call to tawheed (Oneness of God) because it was ruinous for him. Faith in Allah touches the heartstrings of man, and the dormant faith which is lying hidden in the nature of man comes to the fore.

The courtiers were after all men; some of them must have been intelligent and maybe some of them were those whose conscience had not died. It was possible that the call to tawheed might stir up their sense of faith. Fir`awn, therefore, tried to evade the issue. He was very afraid of tawheed. He, therefore, posed this question so that his courtiers might become cautious and realize that Musa wanted to tum them away from the path of their forefathers.

That is why he asked:

There were just two alternatives for Moses (peace be upon him). He could have said in plain terms without any sophistication that “they are in Hell”:

Truly, you (idolaters) and that which you worship beside Allah are fuel for hell. Thereunto you will come. (Al-Anbiyaa’ 21:98)

If he had said that, the door for further talks would have been closed. The courtiers would have flared up and either they would have walked out or manhandled the Prophet Moses (peace be upon him) in a fit of rage, saying: “You are insulting our forefathers.”

The Prophetic Wisdom and a Miracle

The other alternative would have been for Moses to keep quiet or be cunning and say that so far as their ancestors were concerned they were learned and great men and he holds them in high respect. Then Fir`awn would have reason to say that if they were learned, great and respectable then their beliefs were the same as were theirs:

Moses (peace be upon him) again reverted to the main subject which was under discussion earlier. It was possible that he might have said that history would provide information about them. If he had said that, the topic would have changed. Fir`awn would have had the opportunity to dilate upon fictitious stories circulated as historical facts and argued on their basis. But the Prophet Musa (peace be upon him) gave a reply for which there was no answer:

Now consider the simplicity and profundity of the words.

What he wanted to say he expressed in a few words. This is prophetic wisdom and a miracle of inviting to the way of Allah. If we are confronted with such a situation we may find a hundred and one ways to express ourselves and try to wriggle out of a difficult situation. We can say: “It is another matter”, or “I am concerned with the present time and not with the past”, etc.