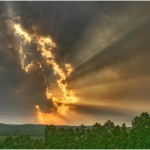 There is, indeed, One God, and different people in the world worship One God, then the One God they worship is one and the same.

Some months ago, a Roman Catholic lady, whom I know well, telephoned me to ask for my prayers. “Our priest is ill,” she said, “and we have tried everything but he does not seem to be getting better. Since we have prayed to our God and nothing has happened, perhaps you could pray to yours.” I was really shocked to hear such words coming from someone close to me. I assured her that I would pray for her priest, but that our prayers are to the same God that we worship.

So, even religious people can miss the point. The God worshipped by Christians, Muslims and Jews is, of course, the same God. There is only One.

It was my own aim, too, last summer, when I was invited to give the sermon at Saint John’s Church in Edinburgh during their Choral Evensong Service, to encourage what we have in common, rather than concentrate on what separates us.

During that sermon I made it quite clear that I was Muslim. No one was left in any doubt. But I spoke about our belief in One God. And I emphasized that when people of faith work together and try to understand one another better, they can make a massive difference in our world.

Followers of these three great faiths understand God differently, but they do not suggest that each one has his own God. Of course, as a Muslim, I would tell you that understanding of Allah in the Qur’an is the correct one, but I would never think of saying that our Christian and Jewish friends worship a different God.

Allah Almighty tell us about Himself in the Qur’an:

This is of the very essence of Islam. Muslims believe that there is One God, alone and without equal, who has created the heavens and the earth and everything in between.

They believe that Islam is the natural religion of mankind, which has existed since the beginning of time, and that all of God’s Prophets throughout history, beginning with the first man, Adam, and then the first Prophet, Noah, have called mankind to the worship of this One God.

Muslims believe that God (Allah in Arabic) sent different Prophets at different times in human history and to different people, to tell them of this one fact: that there is no God but He:

In fact, they believe that He tells us in the Qur’an that this was the reason for His creation being brought into existence:

I did not create the jinns and the humans except to worship Me alone. (Adh-Dhariyat 51:56)

In other words, we exist in this world to know, love and serve the One God, and to be happy with Him forever in the next. The whole of the Qur’an and the whole Sunnah of our beloved Prophet Muhammad (peace be upon him) emphasize this fact.

That which Allah wills will come to pass. There is no power but with Allah. (Al-Kahf 18:39)

Muslims believe that in Islam we have the fullness of revelation. God has spoken about Himself finally and forever in the Qur’an. Even though this belief in the Oneness of Allah is what was preached throughout history, men and women did not always accept the Prophets God sent them.

In fact, according to Islam, the message of Allah became distorted over time, either through translation or by deliberate alteration, so that Jews and Christians ultimately came to believe something different about the nature of that One God.

The Jews saw Him as their own God, and that they were His specially ‘chosen people’, and they drew up laws and regulations according to their belief.

The Christians came to believe that God had a Son, who he sent into the world to redeem mankind from sin, and that the love of Father and Son was embodied in what they call the Holy Spirit.

Despite their different understanding of what God is like, then, the very essence of Judaism is to be found in the Shema: “Hear, O Israel, the Lord your God is One”.

In the same way, Christians may believe that the One God is made up of three persons; Father, Son and Holy Spirit, they nonetheless declare in the very first line of the Creed: We believe in One God, the Father Almighty, Maker of heaven and earth, of all things visible and invisible.

Many Jewish religious services begin with the words, “Blessed are you, Lord God all creation.” Those very same words are repeated in the Christian Liturgy. And they are so similar to what Muslims say when we repeat the opening words of the first chapter of the Qur’an:

In the name of Allah, Most Gracious, Most Merciful. Praise be to Allah, the Cherisher and Sustainer of the Worlds. (Al-Fatihah 1:1, 2)

Finally, there is a very beautiful verse in the Qur’an which emphasizes that our differences are really, in fact, reasons for us to get to know one another better. People of faith have far more in common with each other than with the secular forces that would do away with religion and spirituality altogether.

In emphasizing our belief in One God and using that as a starting point, people of faith can come even closer.

O mankind! We created you from a male and a female, and made you into nations and tribes, so that you might come to know each other. (Al-Hujurat 49:13)

So in conclusion, it stands to reason that if there is, indeed, One God, and that different people in the world worship One God, then the One God they worship is one and the same, even though they understand Him differently.

If there were three Gods, for example, it would be different. The three great religions might well then each be worshipping a God of their own. If there is only One God, though, they are worshipping that One God, but in different ways.