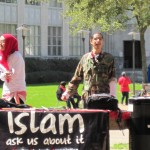 A da`wah table is an admirable and honorable venture to commit oneself to, but there are more and subtler ways of inviting others to the religion

We have the assumption that when we want to participate in da`wah, we imagine a long brown table of splayed Qur’ans, brochures, books, and articles introducing Islam. A booth parked on a university campus or at an event: this is the standard or common way of doing da`wah.

What we fail to realize is that da`wah does not always have to be this elaborate and time consuming. Da`wah comes in various forms and ways, and having a booth is only one way of calling people to the religion.

A dawah table is an admirable and honorable venture to commit oneself to, but there are more and subtler ways of inviting others to the deen (religion); those people who believe they do not have the time or the knowledge to be a missionary in the name of Islam need not to fret because we do da`wah everyday.

Da`wah is an obligation on every Muslim and we participate in da`wah whether we are aware of it or not. The way we act, speak, and communicate within society shows what type of Muslim we are.