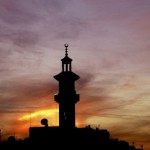 To wake up for Fajr prayer, having a consistent morning routine can be quite challenging.

One of the challenges that a Muslim faces when trying to wake up for Fajr every day is the constant shifting of the Fajr prayer. Depending on the season you’re in, it constantly shifts either few minutes forward each day or few minutes back each day. Thus, it can be difficult to keep up with a varied Fajr schedule throughout the year.

This varied schedule poses three challenges for a productive Muslim:

However, for a Muslim, this is not realistic, especially with the shifting time for Fajr prayer, which can start as early as 1 a.m. or 2 a.m. or as late as 7 a.m., depending on the season and which part of the world you’re in.

2- It’s difficult to maintain a regular “night” prayer routine. If you want to benefit from the last third of the night and get up and pray, you cannot have a consistent schedule. In some seasons, this will require you to wake up as early as 1am or 2 a.m. and in some seasons, you’ll need to wake up at 5 a.m. or 6 a.m. Again, it can be difficult for you to stay consistent.

So How Do You Overcome This Challenge?

The solution is in a new routine I’ve developed recently. By Allah’s permission and help, I have been able to consistently wake up 45 minutes before Fajr Adhan, regardless of the season and time of year I’m in.

This has helped me train my brain to wake up in sync with Fajr prayer Adhan, as well as in sync with the seasons. It has also helped me maintain a regular night prayer + witr routine, since I now have a 45-minute window before the Fajr Adhan .

So here’s my solution: This is a 3-step process that has worked for me and I hope and pray that it works with you.

Step 1: Get the Right Alarm

Every person has a unique “alarm habit” whether you’re consciously aware of it or not. For some, it’s the classic ‘hit the snooze button and sleep until it’s too late for you to hit the snooze button again’ habit. For others, it’s to simply shut the alarm and sleep for another 20-30 minutes before waking up scared that they’ll miss their morning commute.

I used to have quite a funny alarm habit myself. My alarm clock (the Fajr clock I mentioned above) was placed at the other end of my room. When it went off, I got up, walked across the room, turned it off and then walked straight back to bed for a snooze before my phone’s alarm woke me up. Normally, it worked for me. But, sometimes it didn’t and that bothered me.

Thinking about that routine, I realize it didn’t make sense. “Why am I heading back to my bed after waking up and walking across the room?!”. So I decided to change my routine to change my habit.

I simply changed the direction of my walk after I turned off the alarm. Instead of walking back to bed, I walked straight to the bathroom to get ready for salah. Initially, making that conscious shift of walking to the bathroom instead of the bed was quite challenging because I was trying to overcome an old habit.

However, after a few days, this habit has become ingrained in me. Now, I find it much easier to get up at any time the Adhan clock goes off and walk straight to the bathroom and get ready for salah.

When I first changed my alarm habit, I used to have the Fajr alarm set at least 5 minutes before Fajr Adhan. Of course, this gave me no time to pray Tahajjud (late night prayer) or Witr on time. So what I wanted to do was gradually train my mind to wake up earlier and earlier each day. I knew that if I “jerk” my brain to wake up half an hour before the time it’s used to wake up, I might be tempted to go back to my old routine and walk straight into bed for a snooze.

To make this transition smooth, I followed a simple procedure. Each week, I set my alarm to go off 5 minutes earlier than the previous week. This small tweak of the alarm each week allowed me to gradually train my mind to consistently wake up 45 minutes before Fajr each day. This helped me overcome two of the challenges I mentioned earlier:

1- Training my brain to wake up at “same time” each day.

What are My Core/Optional Morning Activities?

I want to go a level deeper with you and give you a really pro tip. This is for the productivity professionals out there.

You can play with the above system so you reduce the variance between your earliest summer wake-up time and earliest winter wake-up time. This way, you don’t go through massive swings during the year. For example, if Fajr gets as early as 3am and as late as 7 a.m. in your area (depending on the season), following my 45-minute routine before Fajr tip, the earliest you’ll wake up in the summer is 2.30 a.m. and the earliest you’ll wake up in the winter is 6.30 a.m. However, that’s a 4 hour swing/variance in one year, which can be quite hard to adapt to.

What if during winter, instead of waking up at 6.30am, you wake up at 4.30am and give yourself a longer period to pray Tahajjud.

This way, the gap between your earliest winter wake-up time and summer wake-up time is 2 hours, which won’t be as difficult to adjust to, In sha Allah.

I hope the above has helped you in some way to develop a powerful wake-up routine that not only allows you to never miss Fajr, but also keep up with the Fajr timings throughout the year and get a chance to keep up with your night prayer each night. Of course, I must mention that waking up early for Fajr and Tahajjud is a blessing from Allah and can only happen by His permission.

Hence whenever applying the above techniques, remember you’re simply taking the means, but your heart and hopes should be connected to Allah in Whose Hands is your ability to wake up. Pray that you wake up early and worship Him and remember: “You Alone we worship and You Alone we ask for help”.