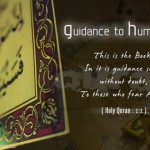 Correcting mistakes formed a part of the wahy (revelation) and the methodology of the Qur’an.

Teaching people is one of the greatest good deeds whose benefits spread to others. It is the da`is’ and educators’ share of the heritage of the prophets and messengers.

“Allah and the angels, and even the ant in its nest and the whale in the sea will pray for the one who teaches people the ways of good.” (At-Tirmidhi)

Dealing with and correcting mistakes is also a part of naseehah (sincerity in religion) which is a duty on all Muslims. The connection between this and the concept of enjoining what is good and forbidding what is evil, which is also a duty, is quite obvious (but we should note that the area of mistakes is broader than the area of munkar (evil), so a mistake may or may not be evil as such).

Correcting mistakes also formed a part of the wahy (revelation) and the methodology of the Qur’an. The Qur’an brought commands and prohibitions, approvals and denunciations and correction of mistakes – even those on the part of the Prophet (peace be upon him). So it included rebukes and pointing out of mistakes, for example:

(The Prophet) frowned and turned away, because there came to him the blind man (interrupting). But what could tell thee but that perchance he might grow (in spiritual understanding)? Or that he might receive admonition, and the teaching might profit him? As to one who regards Himself as self-sufficient, to him dost you attend; though it is no blame to you if he grows not (in spiritual understanding). But as to him who came to you striving earnestly, and with fear (in his heart), of him was you unmindful. (`Abasa 80:1-10)

And (remember, O Muhammad), when you said to him to whom Allah had shown favor and to whom you had shown a favor: ‘Keep your wife to yourself and be careful of (your duty to) Allah;’ and you concealed in your soul what Allah would bring to light, and you feared men, and Allah had a greater right that you should fear Him. (Al-Ahzab 33:37)

Not for you, (but for Allah), is the decision: Whether He turn in mercy to them, or punish them; for they are indeed wrong-doers. (Aal `Imran 3:128)

Qur’an was also revealed to correct the mistakes of some of the Sahabah in some situations. When Hatib ibn Abi Balta`ah (may Allah be pleased with him) made the mistake of writing to the kuffar (unbelievers) of Quraish and informing them of the direction in which the Prophet (peace and blessings of Allah be upon him) was headed on a military campaign against them, Allah revealed the words:

O you who believe! Take not My enemies and your enemies (i.e., disbelievers and polytheists, etc.) as friends, showing affection towards them, while they have disbelieved in what has come to you of the truth, and have driven out the Messenger and yourselves (from your homeland) because you believe in Allah your Lord! If you have come forth to strive in My Cause and to seek My Good Pleasure, (then take not these disbelievers and polytheists, etc., as your friends). You show friendship to them in secret, while I am All-Aware of what you conceal and what you reveal. And whosoever of you (Muslims) does that, then indeed he has gone (far) astray, (away) from the Straight Path. (Al-Mumtahanah 60:1)

Concerning the mistake made by the archers at the battle of Uhud, who left the position where the Prophet had commanded them to stay, Allah revealed the words:

… until (the moment) you lost your courage and fell to disputing about the order, and disobeyed after He showed you (of the booty) which you love. Among you are some that desire this world and some that desire the Hereafter… (Aal `Imran 3:152)

When the Prophet stayed away from his wives in order to discipline them, and some people spread rumors that he had divorced them, Allah revealed the words:

When there comes to them some matter touching (public) safety or fear, they make it known (among the people), if only they had referred it to the Messenger or to those charged with authority among them, the proper investigators would have understood it from them (directly)… (An-Nisaa’ 4:83)

When some of the Muslims failed to migrate from Makkah to Madinah with no legitimate excuse, Allah revealed the words:

Verily! As for those whom the angels take (in death) while they are wronging themselves (as they stayed among the disbelievers even though emigration was obligatory for them), they (angels) say (to them): ‘In what (condition) were you?’ They reply: ‘We were weak and oppressed on earth’. They (angels) say: ‘Was not the earth of Allah spacious enough for you to emigrate therein?’ (An-Nisaa’ 4:97)

When some of the Sahabah believed and repeated the rumors of the munafiqin (hypocrites) accusing `A’ishah of something she was innocent of, Allah revealed verses concerning this lie, including:

Had it not been for the Grace of Allah and His Mercy unto you in this world and in the Hereafter, a great torment would have touched you for that whereof you had spoken. When you were propagating it with your tongues and uttering with your mouths that whereof you had no knowledge, you counted it a little thing, while with Allah it was very great.(An-Nur 24:14)

Wherefore, when ye heard it, said ye not: It is not for us to speak of this. Glory be to Thee (O Allah)! This is awful calumny. Allah admonishes you that ye repeat not the like thereof ever, if ye are (in truth) believers. (Al-Nur 24:16-17)

When some of the Sahabah argued in the presence of the Prophet (peace and blessings of Allah be upon him) and raised their voices, Allah revealed:

O you who believe! Be not forward in the presence of Allah and His messenger, and keep your duty to Allah. Lo! Allah is Hearer, Knower. O you who believe! Lift not up your voices above the voice of the Prophet, nor shout when speaking to him as ye shout one to another, lest your works be rendered vain while you perceive not. (Al-Hujurat 49:1-2)

When the caravan came at the time of the Friday khutbah (sermon), and some of the people left the khutbah and dispersed to engage in trade, Allah revealed the words:

But when they spy some merchandise or pastime they break away to it and leave thee standing. Say: That which Allah has is better than pastime and merchandise, and Allah is the Best of providers. (Al-Jumu`ah 62:11)

Many other examples also indicate the importance of correcting mistakes and not keeping quiet about them.

The Prophet was guided by the light of his Lord in following the principle of denouncing evil and correcting mistakes with no compromise. From this and other reports the scholars derived the principle: ‘it is not permitted for the Prophet to delay speaking up and explaining mistakes at the appropriate time’.

Understanding the Prophet’s methodology in dealing with the mistakes of the people he met is of great importance, because the Prophet was guided by his Lord, and his words and deeds were supported by the wahy, and confirmed or corrected as needed. His methods are wiser and more efficacious, and using his approach is the best way to get people to respond positively. If the one who is in a position to guide and teach others adopts these methods and this approach, his efforts will be successful.

Following the method and approach of the Prophet also involves following his example, for he is the best example for us, and this will lead us to a great reward from Allah, if our intention is sincere.

Knowing the methods of the Prophet exposes the failure of the man-made methodology – which is followed everywhere on this earth – and proves to the followers of that methodology that it is a failure. Much of it is clearly a deviation that is based on corrupt theories such as absolute freedom, or it is derived from false heritages such a blind imitation of one’s fathers and forefathers.

We must point out that the practical application of this methodology in real life relies heavily on ijtihad (studying the situation and attempting to determine the best approach) to a great extent. This involves selecting the best methods for a particular situation.

This article is an excerpt from a book titled Al-Asaleeb An-Nabawiyah (the Prophet’s Methods for Correcting People’s Mistakes) by Sheikh Muhammad Saleh Al-Munajjid, a prominent Saudi Islamic lecturer and author.