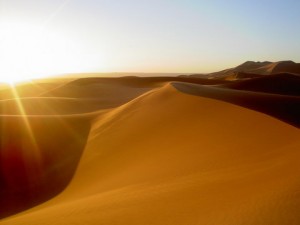 This article is one of a series of articles dealing with the methodology and approach adopted by Prophet Muhammad (peace and blessings be upon him) in inviting people to Islam, then a new and previously unheard-of religion. As in all other aspects of life, Prophet Muhammad is our role model in da`wah. This series, based on a study by Dr. Jamal Badawi, a Muslim Canadian scholar, sheds light on some of his noble attributes and manners manifest in conveying the message of Almighty Allah to all people, rich and poor, powerful and weak, old and young, and Arab and non-Arab.

Muslims believe that inviting people to the straight path of Allah is in fact an invitation to truth, goodness, virtue, and felicity in this life and the hereafter. This explains why such an invitation (da`wah in Arabic) is considered a duty on every Muslim to the extent of his or her knowledge and ability.

The Most Merciful taught the Qur’an, created man, and taught him to communicate. (Ar-Rahman 55:1-4)

Inviting people to the ultimate goodness is the best and most noble use of the bounty of communication. It is certainly of the best speech:

Who speaks better than someone who calls people to Allah, does what is right, and says, “I am one of those who submit devoutly to Allah.” (Fussilat 41:33)

Explaining this Qur’anic injunction, Prophet Muhammad (peace and blessings be upon him) taught Muslims to convey his teachings, even if a single statement, and that if Allah guides one person through you, it is better for you than this world and everything therein. (Al-Bukhari)

A Muslim who seeks to discharge his or her da`wah duties needs to look up to a role model in da`wah. For Muslims, the role model par excellence in da`wah and all other virtues is none but Prophet Muhammad (peace and blessings be upon him). This is the testimony of the Qur’an, which Muslims believe to be the word of God:

The Messenger of Allah is an excellent model for those of you who put their hope in Allah and the last day and remember Him often. (Al-Ahzab 33:21)

This paper is an attempt to discern some elements of that role model for da`wah. It is no more than scratching the surface of such a rich model, in the hope that it may shed light on such an important and timely topic.

The paper begins by clarifying its methodology which is then to be applied in addressing some of the major elements of the Prophet’s model of da`wah.

Methodology of the Paper

It may be noted that the title of the paper avoided using the English term “religions”. There are two reasons for that:

First: the common perception of the term “religion” in the Western world is narrower than the term “deen” in Arabic, which literally means “a way of living”, which is more holistic and comprehensive.

Second: a related meaning of “deen” is what a person believes. This includes, not only “people of the Book”, but others as well. Even pre-Islamic idolatry was called “deen” in the Qur’an.

It may be noted also that the term “other faith communities” is used instead of “non-believers” or “disbelievers”, terms which are imprecise in meaning and may sound negative in tone among contemporary English-speaking people. While the term “non-Muslims” is better than both terms and is factual, it has been my consistent experience in recent years that addressing “non-Muslims” as “other faith communities” make them more receptive, comfortable, and willing to listen. In any case, there should be no dispute about terms so long as the meanings are understood.

On a more substantive level, the paper is not exclusively based on biographies of the Prophet’s life. It is based, rather, on the acceptance of the Qur’an as the primary and most authentic source of seerah, or the Prophet’s biography. It is true that the Qur’an is not primarily a book of history, and hence it does not focus, generally speaking, on detailed historical narratives. However, many key events of the Prophet’s biography are alluded to in the Qur’an, such as the beginning of revelation, his suffering at the hands of his people, his immigration to Madinah, and some of the key battles and encounters fought for survival such as Badr, Uhud, the Allies, Tabuk, and Hunain.

The Qur’an alludes as well to the internal threats to the nascent community in Madinah, the rise of the phenomenon of hypocrisy, and many other events in the life of the Prophet. Notwithstanding the absence of many detailed narratives in the Qur’an, it still serves as the highest and most authentic criterion whereby to critically evaluate historical narrations in the Prophet’s biography.

Another justification for starting with the Qur’an is the fact that the Prophet’s methodology of da`wah was simply the embodiment of the teachings of the Qur’an. When `A’ishah, the Prophet’s wife, was asked about his character, her answer was succinct, eloquent, and clear: “His character was the Qur’an.”

This is the underlying assumption of this paper. For each element of the methodology of the Prophet, relevant references to the Qur’an are cited and they act as the anchor of that element. Since sound traditions and sayings of the Prophet (the Sunnah) are meant to elaborate, explain, and show how to apply the Qur’anic teachings, they are referred to after the Qur’an. Only in the third place are biographies referred to for details that are consistent with the Qur’an and the sound Sunnah.

Taken with slight modifications from www.onislam.net.