The Significance of Giving Da`wah to Non-Muslims 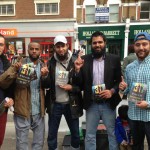 The task of delivering the final message of Allah to mankind after the Prophet has been laid on the Muslim nation.

Da`wah among non-Muslims occupies a very high rank in Islamic good deeds because it is the heritage of the prophets of Allah, the continuation of their mission, and the core of their message.

Islam is for all peoples, not for Muslims only

The Muslim Ummah is entrusted with the duties of da`wah among non-Muslims because Islam is the final message of Allah to all mankind.

Every prophet before Islam was sent to his people only. And after he left this world, another prophet carried his mission after him. Prophet Muhammad (peace be upon him) was not only the last Prophet but was also sent to all peoples; there are no Prophets coming after him to continue preaching the message of Allah as it used to be with previous nations.

Therefore, the task of delivering the final message of Allah to mankind after him has been laid on the Muslim nation.

This universal message of Islam is stressed in the Qur’an in many verses:

1- Prophet Muhammad was sent as a mercy from Allah to all peoples at all times and ages. This mercy includes all mankind not only Muslims:

Blessed is He Who sent down the criterion to His servant, that it may be an admonition to all the worlds. (Al-Furqan 25:1)

And We have not sent you but to all mankind as a bearer of good news and as a warner, but most people do not know. (Saba’ 34:28)

Say: “O mankind! surely I am the Messenger of Allah to you all, of Him Whose is the kingdom of the heavens and the earth; there is no god but He; He gives life and causes death; therefore believe in Allah and His Messenger, the illiterate Prophet who believes in Allah and His words, and follow him so that you may be rightly guided.” (Al-A`raf 7:158)

2- Qur’an is a reminder to all peoples:

And you do not ask them for a reward for this; it is no less than a Message to all creatures. (Yusuf 12:104)

3- Qur’an is the only scripture that addresses all peoples saying : “O mankind….”. Qur’an calls all mankind to worship Allah alone, and warns them against the evil consequences of rejecting His Message. Here are examples of these verses:

Mankind! Worship your Guardian-Lord, Who created you and those who came before you, that you may learn righteousness. (Al-Baqarah 2:21)

Thus Allah makes His Signs clear to mankind!: that they may learn righteousness. (Al-Baqarah 2:187)

O mankind! fear your Lord, who created you from a single soul, and created of it its mate, and from them scattered (like seeds) countless men and women. (An-Nisaa’ 4:1)

O mankind! Your rebellion is against your own souls. (Yunus 10:23)

Say: O you mankind! if you are in doubt as to my religion, then (know that) I do not worship those whom you worship besides Allah but I do worship Allah, Who will take your souls (at death):, and I am commanded that I should be of the believers. (Yunus 10:104)

Say: “O you mankind! indeed there has come to you the truth from your Lord therefore whoever goes aright, he does so for the good of his own soul, and whoever goes astray, he does so to his own loss, and I am not (set) over you to arrange your affairs.” (Yunus 10:108)

O mankind! fear your Lord! For the convulsion of the Hour (of Judgment) will be a thing terrible! (Al-Hajj 22:1)

4- Prophet Muhammad stressed the universality of his mission in many authentic traditions. He always emphasized that he was sent to all peoples: the Arabs and non-Arabs, the black and white. He called for the equality of mankind for they all belong to the same parents.

They all are created from the dust of the earth. There is no superiority of an Arab over a non-Arab or of a white over a black.

5- Prophet Muhammad spent his life calling all kinds of peoples, coming from different backgrounds, to Islam: the slaves and masters, kings and their subjects, the young and old, the Arabs and non-Arabs, the Christians and Jews, and the black and white, without any differentiation between them. The Sahabah (the contemporary Companions of Prophet) were from among the slaves and masters, the rich and poor, the Arabs and non-Arabs.

Among the prominent Sahabah were: Salman (the Persian), Huhaib (the Roman), and Bilal (the Ethiopian).

He invited the Arab kings in north and south of Arabia as well as kings, leaders, and rulers beyond Arabia to Islam. Deputations were sent to Negus, king of Ethiopia, Hercules, Roman Emperor, Chosroes (Khosrau), Emperor of Persia, and vicegerent of Egypt (Muqawqas). The message to all of them was one and the same; he (peace be upon him) declared that he was the last Messenger of Allah to all peoples; and invited them to accept Islam and then they will be safe in this life and the Next life.”

6- After Prophet Muhammad, the Sahabah followed his way and carried the message of Islam to all peoples; in a relatively short time the whole of Arabia accepted Islam; then the call of Islam spread to Spain in the west and India in the east irrespective of the barriers of race, nationality, languages, or geographical boundaries.