How important is greeting? What moral and social impacts does it have? How do Muslims greet each other?  How can we make it a habit?

In this age of technology and science, moral values and religious teachings taught in order to promote a refined society largely are neglected by all nations, and most unfortunately, Muslims are one of them. 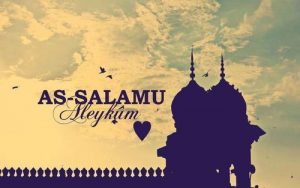 Greeting in Islam not only increases friendship, harmony and respect, it simultaneously signifies fulfilling the rights of du`aa’

These moral downfalls are leading the Ummah toward the ditch of destruction; thus, it’s time we examine our attitude and improve it. Each community has words of greeting that are used when members of a community meet. Such greetings are to express courtesy and promote positive feelings.

The greetings granted to Muslims by the Qur’an hold the highest spiritual as well as moral values among the greetings of other nations.

Prior to Islam, it was common among the dwellers of the Arabian Peninsula to say, “Hayak Allah” (May Allah grant you life) and “Sabah Al-khair” (Good morning).

A person once came into the presence of Al-Husayn ibn `Ali and said, “Kayfa anta? `Aafak Allah” (How are you? May Allah keep you safe). Al-Husayn immediately corrected him in the best manner, nicely giving him the basic teaching of Islam and responding with the following words, “Assalamu qabal al-kalaamu, `aafak Allah” (Say Salam prior to talking, may Allah protect you). He then taught: Don’t give permission to anyone until he says Salam.

At another place, Al-Husayn described the reward of Salam very precisely in these words: “There are 70 good deeds in Salam: 69 for the one who says it and only one for the person who responds. One who doesn’t reply to Salam is a miser” (Bihaar Al-Anwaar, Vol. 17, Qum).

The Qur’an directs us to respond Salam in a more courteous manner:

And when you are greeted with a greeting, greet with a better (greeting) than it or return it; surely Allah takes account of all things. (An-Nisaa’ 4:86)

Proud and arrogant people never initiate saying Salam, considering it below their dignity to reply. They only slightly move their head and smile instead of saying “Wa`alaykum assalam” They are misers of the worst class, as per Prophetic traditions.

Al-Husayn said, “The greater miser is the one who displays misery in reciting Salam”. Not only this, but the Prophet Mohammad (peace be upon him) declared in crystal clear terms, “Whoever does not reply ‘Salam’ is not from us,” while one hadith notes, “The principal of humility begins with Salam.”

Greeting in Islam not only increases friendship, harmony and respect, it simultaneously signifies fulfilling the rights of du`aa’ (supplicatory prayer) for Muslims. Additionally, As-Salam is one of the Names of Allah.

Salam is highly recommended when visiting the graves:

Salaam upon you, O people of the graves, from the believers. You preceded us and we shall meet you, Insha’Allah).

How to Say Salam?

One hadith recommends reciting Salam in a manner that each one can hear clearly. The one who initiates the Salam first is closest to Allah. Hadith literature provides us with glorious teachings in this regards.

Salam should be offered to all Muslims, irrespective of whether they are acquaintances or strangers. Saying Salam aloud to everyone in a gathering is sufficient, as it’s unnecessary to greet each person individually. However, it’s incorrect to greet only a particular person in a gathering. Additionally, always convey Salam cheerfully.

In this regard, the following conversation is worth mentioning and available in the sacred scriptures. When Yahya met Isa (peace be upon them), he began by saying, “Salam,” and was answered with, “Salam.” Whenever Yahya met `Isa, Yahya always was happy and smiling, but `Isa was sorrowful, as if he resembled a crying person.

`Isa asked Yahya, “You smile like a happy person, as if you’re secure and protected,” to which Yahya replied, “You display such sorrow, as if you’ve given up all hope.” Then the commandment appeared, “The one who smiles the most is the dearest to Me.”

If a person is at a distance where Salam may not be heard, then Salam can be offered with a hand signal.

However, it’s undesirable to recite Salam when a person is engaged in the following activities:

If one says, “Convey my Salam to your parents,” don’t reply on behalf of your parents, as you aren’t authorized and have no right to do that. An amazing practice prevalent on written invitations is, “Salam from our late parents.”

Does anyone have the power to visit, meet and hear Salam from the deceased and then forward it to others? All credit goes to the silly writer who designed such a text and which others blindly follow.

Another unpleasant practice very common today is using “Hi” instead of Salam in email and SMS prior to beginning a conversation.

Salam is also done by embracing a person and drawing him close to you upon meeting him after returning from a journey or after a long absence. Using both arms, hug the person around the neck and shoulders and draw him toward your chest. Men may practice this Sunnah with men and women can do it with women.

Always say Salam when visiting or telephoning others and care should be taken not to visit or phone anyone during times of rest or salah.

Additionally, never enter a home – no matter whose it is – without permission. To ask permission to enter, ring the bell and when the person of the house enquires as to who’s there, say Salam aloud and give your name, instead of saying, “Me,” as the Prophet instructed.

If you realize the one inside has heard your ring or voice and is purposely ignoring it, then repeat the ring three times. If there’s no permission or answer, then as per the Hadith, you must return.

Dr. Qazi Shaikh Abbas Borhany is an attorney, a religious scholar and a member of Pakistan’s Ulama Council. He received a doctorate in the United States at NDI and a Shahadat Al-Aalamiyah in Najaf, Iraq.