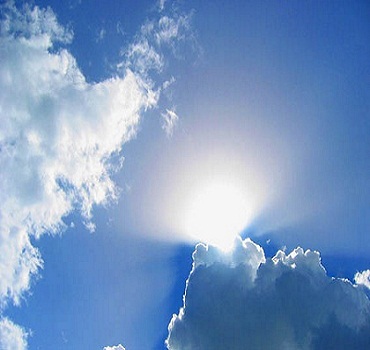 Allah is the Sustainer of the universe

Man is made to adore and to obey: but if you will not command him, if you give him nothing to worship, he will fashion his own divinities, and find a chieftain in his own passions.

The critical difference between Jesus’ teachings and the Trinitarian formula lies in elevating Jesus to divine status—a status Jesus denies in the gospels:

“For I have not spoken on my own authority; but the Father who sent me gave me a command, what I should say and what I should speak.” (John 12:49)[1]

What does Pauline theology say? That Jesus is a partner in divinity, God incarnate. So whom should a person believe? If Jesus, then let’s hear what else he might have to say:

“But of that day and hour no one knows, neither the angels in heaven, nor the Son, but only the Father.” (Mark 13:32)

My italics in the above verses do not imply that Jesus spoke with that emphasis, although nobody can claim with certainty that he didn’t. Rather, the italics stress the fact that Jesus not only never claimed divinity, but would be the first to deny it. In the words of Joel Carmichael, “The idea of this new religion, with himself as its deity, was something he [Jesus Christ] could never have had the slightest inkling of. As Charles Guignebert put it, ‘It never even crossed his mind.'”[2]

So if Jesus never claimed divinity, then what was he exactly? He answered that question himself:

“A prophet is not without honor except in his own country, among his own relatives, and in his own house.” (Mark 6:4)

“But Jesus said to them, “A prophet is not without honor except in his own country and in his own house.” (Matthew 13:57)

“It cannot be that a prophet should perish outside of Jerusalem.” (Luke 13:33)

Those who knew him acknowledged, “This is Jesus, the prophet from Nazareth of Galilee” (Matthew 21:11), and “A great prophet has risen up among us…” (Luke 7:16). The disciples recognized Jesus as “a prophet mighty in deed…” (Luke 24:19) (Also see Matthew 14:5, 21:46, and John 6:14). If these statements were inaccurate, why didn’t Jesus correct them? Why didn’t he define his divinity if, that is, he truly was divine? When the woman at the well stated, “Sir, I perceive that you are a prophet'” (John 4:19), why didn’t he thank her for her lowly impression, but explain there was more to his essence than prophethood?

Jesus Christ, a mere man? Could it be? A good part of the religiously introspective world wonders, “Why not?” Acts 2:22 records Jesus as “Jesus of Nazareth, a man attested by God to you by miracles, wonders, and signs which God did through him in your midst, as you yourselves also know.” Jesus himself is recorded as having said, “But now you seek to kill me, a man who has told you the truth which I heard from God…” (John 8:40). Strikingly, a similar quote is found in the noble Qur’an:

He [Jesus] said, “I am indeed the servant of Allah: He has given me Revelation and made me a prophet.” (Maryam 19:30)

So, was Jesus a “servant of Allah (i.e., servant of God)?” According to the Bible, yes. Or, at least, that is what we understand from Matthew 12:18: “Behold! My servant whom I have chosen…” Furthermore, Acts of the Apostles traces the growth of the early church for the first thirty years following Jesus’ ministry, but nowhere in Acts did Jesus’ disciples ever call Jesus “God”. Rather, they referred to Jesus as a man and God’s servant.[3]

In fact, the only New Testament verse which supports the doctrine of the Incarnation is 1 Timothy 3:16.[4] However, with regard to this verse (which states that “God was manifest in the flesh”), Gibbon notes, “This strong expression might be justified by the language of St. Paul (I Tim. iii. 16), but we are deceived by our modern bibles. The word ë (which) was altered to qeèv (God) at Constantinople in the beginning of the sixth century: the true reading, which is visible in the Latin and Syriac versions, still exists in the reasoning of the Greek, as well as of the Latin fathers; and this fraud, with that of the three witnesses of St. John, is admirably detected by Sir Isaac Newton.”[5]

Fraud? Now there’s a strong word. But if we look to more modern scholarship, it’s a word well applied, for “some passages of the New Testament were modified to stress more precisely that Jesus was himself divine.”[6]

The Bible was modified? For doctrinal reasons? Hard to find a more appropriate word than “fraud,” given the circumstances.

In a chapter entitled “Theologically Motivated Alterations of the Text” in his book, Misquoting Jesus, Professor Ehrman elaborates on the corruption of 1 Timothy 3:16, which was detected not only by Sir Isaac Newton, but also by the eighteenth century scholar, Johann J. Wettstein. In Ehrman’s words, “A later scribe had altered the original reading, so that it no longer read “who” but “God” (made manifest in the flesh). In other words, this later corrector changed the text in such a way as to stress Christ’s divinity… Our earliest and best manuscripts, however, speak of Christ ‘who’ was made manifest in the flesh, without calling Jesus, explicitly, God.”[7]

Ehrman stresses that this corruption is evident in five early Greek manuscripts. All the same it was the corrupted, and not the “earliest and best,” biblical manuscripts which came to dominate both the medieval manuscripts and the early English translations.[8] Consequently, from medieval times on, the tenets of Christian faith have suffered the corrupting influence of a church devoted more to theology than to reality.*

Ehrman adds: “As Wettstein continued his investigations, he found other passages typically used to affirm the doctrine of the divinity of Christ that in fact represented textual problems; when these problems are resolved on text-critical grounds, in most instances references to Jesus’ divinity are taken away.[9]

Given the above, there should be little surprise that twentieth-century Christianity has expanded to include those who deny the alleged divinity of Jesus. A significant sign of this realization is the following report of the London Daily News: “More than half of England’s Anglican bishops say Christians are not obliged to believe that Jesus Christ was God, according to a survey published today.”[10] It is worth noting that it was not mere clergy that were polled but bishops, no doubt leaving many parishioners scratching their heads and wondering who to believe, if not their bishops!

Taken with kind permission from www.LevelTruth.com.

A graduate of Cornell University, Brown University Medical School and George Washington University Hospital residency program, Laurence B. Brown is an ophthalmic surgeon, a retired Air Force officer, and the medical director and chief ophthalmologist of a major eye center. He is also an ordained interfaith minister with a doctorate in divinity and a PhD in religion, and the author of a number of books of comparative religion and reality-based fiction. His works can be found on his website www.LevelTruth.com

[4] In the past, some theologians attempted to validate the Incarnation on the basis of John 1:14 and Colossians 2:9. However, in the face of modern textual criticism these verses have fallen from favor, and for good reason. John 1:14 speaks of “the Word,” which by no means implies divinity, and “the only begotten of the Father,” which by no means is an accurate translation. Both of these subjects were discussed (and discredited) in previous chapters. As for Colossians, problems transcend the incomprehensible wording, beginning with the simple fact that Colossians is now thought to have been forged. For details, see Bart D. Ehrman’s Lost Christianities, p. 235.

[6] Metzger, Bruce M. and Ehrman, Bart D. The Text of the New Testament: Its Transmission, Corruption, and Restoration. p. 286.