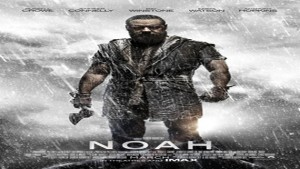 Noah was a prophet whom God sent to call on people to worship God alone and believe in the Hereafter.

Nowadays, we all hear about the American movie “Noah” which is an American epic biblically-inspired fantasy film based on the story of Noah’s Ark, starring Russell Crowe as Prophet Noah.

While we can find the story of Prophet Noah once in the Bible (Genesis 5:32-10:1), we can read it in several positions in the Qur’an, taking into consideration that there is a standalone chapter in the Qur’an dealing with the story of Noah, which is named after him: “Chapter of Noah”.

In fact, there is considerable similarity between the Qur’anic narration and the biblical narration on which the film is based but with reservations. Indeed, the biblical account involves some statements which contradict the Qur’anic narration and sometimes the very commonsense. According to the Islamic perspective, such differences are attributable to the systematic distortion to which the Bible was exposed at several points of time.

For example, the Bible says that God repented the creation of man on the Earth and this grieved Him at His heart. That is why He said that He would destroy man from the face of the ground even along with beasts, the creeping things and the birds of the heavens. (Genesis 6:5-7)

In comparison, the Qur’an does not make mention of any repentance on the part of God. According to Islam, it does not beseem God to show human feelings especially repentance, regret and the like.

Under Islam, God foreknows everything and so He is unlikely to show regret. When God created man, He foreknew that he is likely to do evil. In the Qur’an, we read the following verse:

“And [mention, O Muhammad], when your Lord said to the angels, ‘Indeed, I will make upon the earth a successive authority.’ They said, ‘Will You place upon it one who causes corruption therein and sheds blood, while we declare Your praise and sanctify You?’ God said, ‘Indeed, I know that which you do not know.’”(Al-Baqarah 2:30)

The Qur’an tells us that the Trust was offered to the heavens, the earth and the mountains, but they declined to bear it and feared it, but man undertook to bear it. (Al-Ahzab 33:72)

The Qur’an goes on, making clear the consequences of bearing such Trust:

“[It was] so that God may punish the hypocrite men and hypocrite women and the men and women who associate others with Him and that God may accept repentance from the believing men and believing women. And ever is God Forgiving and Merciful.”(Al-Ahzab 33:73)

Furthermore, the Bible states that Noah “drank of the wine, and was drunken. And he was uncovered within his tent.” (Genesis 9:21)

Anyhow, laying aside the above differences between the biblical narration and the Qur’anic narration, we can conclude that there are many things in common and there are lessons that may be learnt from this story according to either the Bible or the Qur’an.

The crux of the matter here is the cause of faith, obedience to God and good deeds on the earth. Both the Bible and the Qur’an indicate that the Great Flood was caused by disbelief, sin, disobedience, wickedness, wrongdoing and aberration.

The Qur’an elucidates that Noah was a prophet whom God sent to call on people to worship God alone and believe in the Hereafter. Though he spared no effort to reform them, they insisted on disbelief and disobedience. As a result, God decided to destroy them and save Noah and the few believers who followed him.

In conclusion, we should not be distracted by the details from the significance of the stated story. It should be borne in mind that the story of Prophet Noah has a long-term, far-reaching purpose which everybody of us has to take into account.

Finally, this deluge was a unique, momentous event which was meant as an everlasting warning to all humanity against disbelief and disobedience. Suffice it to say that the followers of all Abrahamic religions, including Jews, Christians and Muslims, believe in this historic occurrence.

From Adam to Noah: The Need for Guidance

Prophet Noah between Hollywood and the Qur’an