The Trinity, which I came to know, is not biblical. The word trinity is not even in the Bible, nor the Bible dictionaries. The trinity was never taught by Jesus and was never specifically mentioned by Jesus. 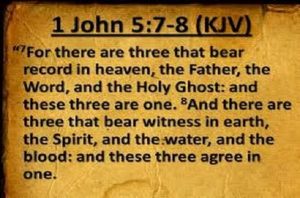 The formulation of the trinity was presented by Athenasius, an Egyptian deacon from Alexandria, and was also accepted by the Council of Nicea more than three centuries after Jesus had departed the earth.

Other such man-made decisions of the Council contributed to the declaration of the Roman Sunday as the Christian Sabbath and the establishment of December 25 as Jesus’ birthday.

This was done in order to have a celebration that occurred on the same day as the birthdays of pagan gods such as Nimrod (Babylon god), Krishna (Hindus god), Mithra (Greek/Roman god), and Dionysius (or Bacchus of Greece) who is named the only begotten son of Jupiter and was born of a virgin mother named Demeter on December 25th.

Clearly, the Bible predicted and forbade the decoration of (Christmas) trees in Jeremiah 10:25:

“Thus said the Lord, ‘Learn not the way of the heathen, and be not dismayed at the signs of heaven; for the heathen are dismayed at them. For the customs of the people are vain: for one cuts a tree out of the forest, the work of the hands of the workman, with the axe. They deck it with silver and with gold; they fasten it with nails and with hammers, that it move not.’” (Jeremiah 10:2-4, The New King James Version)

“For there are three that bear record in heaven, the Father, the Word, and the Holy Ghost: and these three are one.”

This verse has long been exposed as spurious, an unauthorized addition to the Greek text of the New Testament. Christian scholars of the Bible later found that this dogma was an interpolation in the King James version. In fact, no less than a group of 32 Christian scholars of highest eminence, advised by a board of 50 representatives of various denominations came up in 1949 with a revised standard version of the New Testament, and of the whole Bible in 1952, discarding the foregoing passage.

The New Testament refers many times to Jesus as God’s servant (see Matthew. 12:18 for example).

“Men of Israel, listen to this: Jesus of Nazareth was a man accredited by God to you by miracles, wonders and signs, which God did among you through him, as you yourselves know.” (Acts 2:22)

How then could Jesus be God’s servant and God at the same time? Read John 17:21., “That they all may be one; as thou, Father, art in me, and I in thee, that they also may be one in us: that the world may believe that thou hast sent me”, and you will deduce that if God, Jesus and the Holy Ghost form one unity of the Trinity, then with the disciples included they should form a God unity of fifteen (15). According to John 14:9, Jesus is God;

“ …he that has seen me has seen the Father.”

As indicated in Exodus 33:20, human sight cannot bear to look upon the glory of God and live, so how can human flesh bear to have this Glory wrapped up in it?14 What the disciples saw was Jesus, the Prophet, and not God:

“ …ye have neither heard His (God) voice at any time, nor seen His shape,” (John 5:37) also contradicts Matthew 3:17 in which it is said that God was heard saying “this is my beloved Son, in whom I am well pleased.”

Trinity in the Qur’an

At this point let me mention what the Qur’an says about the Trinity:

They disbelieve who say: Allah is one of three (In a Trinity) for there is no god except One God. If they desist not from their word (of blasphemy), verily a grievous chastisement will befall the disbelievers among them. (Al-Ma’idah 5:73)

Is this not what is mentioned in the law (Torah/Old Testament) of Moses within the meaning of the first commandment – The Oneness of God, which Jesus came not to destroy but to fulfill, as conveyed strongly in John 5:46-47:

“For had you believed Moses, ye would have believed me: for he wrote of me. But if you believe not his writings, how shall ye believe my words?”

Moses spoke of no Trinity, neither did Jesus! So why should Christians?

A special reference concerning the Trinity should be added here as printed in the August 25th 1997 issue of Newsweek titled Hail, Mary,

“Further to the Holy Trinity, a growing movement in the Roman Catholic Church wants the Pope to proclaim a new, controversial dogma: that Mary, the mother of Jesus, is a co-redeemer. Therefore, in place of the Holy Trinity, it would appear, there would be a kind of Holy Quartet, with many playing the multiple roles of daughter of the Father, mother of the Son and spouse of the Holy Spirit.”

The article is an excerpt from the eBook “The Bible led me to Islam” by Abdul Malik (M. J.) LeBlanc, endorsed by Sheikh Ahmed Deedat