The notion of tawheed (the Oneness of God, tawheed al-rububiyya), of His names and His attributes (tawheed al-asma’ was-sifat), determines that the conception of human nature will be “a mirror image” and “a contrario,” one may say.

A relationship of obligation, trust is fully achieved with God when we cross the threshold of the realm of inner peace.

If God is one, everything in creation is in pairs, double, seeking union. Tawheed(Oneness), for the Transcendent, is an expression of the essence of being; union, for created beings, is achieved through marriage, fusion, movement.

The Body & the Soul

Created by the One, humans must go in search of the unity of their own being; their heart, their soul, their mind, and their body.

Put thus, it may give the impression that there is nothing to differentiate this from the Greek, Jewish, or Christian traditions. We well know the approach whose most familiar expression is the opposition between the soul and the body.

But a careful reading of the scriptural sources reveals that there is nothing in the Islamic tradition that can serve as a basis for the dualistic approach that opposes two constituent elements of humankind, each characterized by a positive or negative ethical quality: the soul would be the expression (explicitly or implicitly) of good, the body the expression (explicitly or implicitly) of evil.

Never does the Qur’anic revelation or the Prophetic tradition suggest anything of the sort. The ethical crux is not in the opposition of two elements that are separate and ethically fixed (which would represent the two poles of morality) but rather in controlling and guiding them toward their necessary merger, their inevitable union.

From the beginning, the Islamic tradition rejects this kind of antithetical dualism and bases the measurement of moral categories on the ability of human consciousness to take responsibility for finding balance, establishing harmony, making peace.

The human being is, essentially, responsible; awareness of tawheed invites humanity to set out on the quest, along the divine path (sabil Allah), to control, in the midst of the fluctuations of life, the contradictions within its being, its weaknesses, and its deficiencies.

This exercise of responsible control is an education that makes the human being truly human at the heart of a search which is like a virtuous and ascending circle; union, which is at the center of being, brings us toward tawheed (the oneness) of the being.

The opposite here would be an absence of boundaries and morality, a lack of constraint, that would drag the conscience into sleep, into the vicious circle of excess, which may even extend to bestiality.

An interesting passage in the Qur’an speaks of beings who lose awareness completely as being more lost than animals.

Thus, consciousness, when it atrophies to the point of prompting the human being only by means of the same instinct as the animals possess, is dehumanized. It is consciousness and control that define the humanity of humankind.

It is the human ability to control, to combine, and to guide that determines the ethical quality of individuals, their nafs, their hearts, their bodies, feelings, each of their emotions, as well as each of their actions.

Knowledge is not always positive in itself (in contrast to ignorance, which is by nature negative). Nothing like this is to be found in the Islamic universe of reference. Sexuality may be a prayer and motherhood may be hell, depending on the moral intention that motivates the person.

In other words, the ethical quality of the elements of which we are constituted (nafs, heart, body, and so on), the faculties by which we are characterized (such as perception, intelligence, and imagination) and, of course, the actions we produce are determined only by the guidance our conscience gives them. 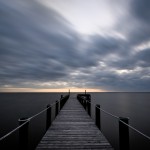 A relationship of obligation and trust is established with the divine that is fully achieved only when we cross the threshold of the realm of inner peace.

This teaching reveals a perception of the human that is at once very demanding and very optimistic—demanding because the human conscience must acquire alone – “No one can bear another’s burden” (Al-Israa’ 17:15) – responsible control in a world where evil is neither an indelible mark on the being-in-the-world (like original sin) nor in itself a constituent part of the being- like the body or the imagination.

It is above all optimistic, for it requires us not to reject any part of our being, encouraging in us the confidence that the Only One will give us in every situation the means to meet this ethical challenge. “God only imposes on each soul [human being] what it is able to bear,” (Al-Baqarah 2:186) and along the way He provides numerous signs, invitations, and supports.

Thus, a relationship of obligation and trust is established with the divine that is fully achieved only when we cross the threshold of the realm of inner peace.

It remains to discover how to discern the guidance we have spoken of.

The Islamic tradition also offers an original conception of humankind that the sufis (Muslim mystics) have very much emphasized. It contains the idea of movement and dynamism that, as we have seen, characterizes Islamic thought.

Awareness of the divine, far from the dualist thinking which opposes “faith” to “reason,” sets in motion, as we shall see, a quest for the original breath that cannot dispense with reason in order successfully to bring to birth a faith that is both confirmation and reconciliation.

The article is an excerpt from the author’s book Western Muslims and the Future of Islam, Oxford University Press (2004).