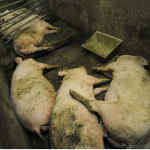 Pigs are scavengers by nature, which means that they will eat almost anything, including rotten food, feces, urine, carcasses and even cancerous growths.

There are many religions that specifically forbid the consumption of pork. The meat is considered “unclean” and non-kosher. Is there a reason for this? Is there more to this religious teaching that we should all be aware of?

It seems as though the religions that condemn pork consumption are on to something, in fact there are many scientific claims to back this up.

Pigs are scavengers by nature, which means that they will eat almost anything, including rotten food, feces, urine, carcasses and even cancerous growths. Unfortunately the digestive system of a pig is incapable of effectively removing these accumulated toxins from the body because a pig will digest its food entirely in about 4 hours. This is simply not long enough to remove the excess toxins that were ingested, these toxins are then stored directly in the fat cells and organs of the pig itself.

Ironically enough, that statement isn’t true -pigs do not have sweat glands which means they are unable to remove excess toxins by sweating (like we do).

So naturally this means that pork meat would be a much more toxic meat than others and when you consume it you would be taking in those toxins as well. With our current environments, we really don’t need to expose our bodies to even more toxins if we don’t have to.

According to an investigation by Consumer Reports, 69% of all raw pork samples tested (of about 200 samples) were contaminated with a dangerous bacteria known as Yersinia enteroclitica. This bacteria can cause fever, gastrointestinal illness, diarrhea, vomiting and cramps.

Ground pork was more likely to be contaminated than pork chops. This pork also tested positive for other contaminants including a controversial drug called ractopamine, which is banned China and Europe.

Many of the bacteria that were found in the pork were actually resistant to multiple antibiotics, which makes treatment problematic and potentially lethal if you were to get sick.

According to the report:

“We found salmonella, staphylococcus aureus, or listeria monocytogenes, more common causes of foodborne illness, in 3 to 7 percent of samples. And 11 percent harbored enterococcus, which can indicate fecal contamination and can cause problems such as urinary tract-infections.”

Pigs are a host to a number of parasites, viruses and other organisms, many of which can be directly transmitted to humans, some include:

Taenia solium: an intestinal parasite that can cause tissue infection and loss of appetite.

Menangle virus: a virus that can cause fever, chills, rashes, headaches and sweating.

Trichinella: A parasitic roundworm that can cause edema, myalgia, fever and malaise.

Hepatitis E: A viral inflammation that can cause fatigue, nausea and jaundice. More severe cases can lead to liver fibrosis and cirrhosis.

The study does indicate that if you were to cook the pork properly you can reduce the risk of the these parasites affecting you, but there is no guaranteed temperature for safety when it comes to pork.

If you still choose to consume pork, follow the following guidelines to increase safety.

As issued by Consumer Reports:

When cooking pork, use a meat thermometer to ensure that it reaches the proper internal temperature, which kills potentially harmful bacteria: at least 145° F for whole pork and 160° F for ground pork.

Keep raw pork and its juices separate from other foods, especially those eaten raw, such as salad.

Choose pork and other meat products that were raised without drugs. One way to do that is to buy certified organic pork, from pigs raised without antibiotics or ractopamine.

Look for a clear statement regarding antibiotic use. “No antibiotics used” claims with a USDA Process Verified shield are more reliable than those without verification. Labels such as “Animal Welfare Approved” and “Certified Humane” indicate the prudent use of antibiotics to treat illness.

Watch out for misleading labels. “Natural” has nothing to do with antibiotic use or how an animal was raised. We found unapproved claims, including “no antibiotic residues,” on packages of Sprouts pork sold in California and Arizona, and “no antibiotic growth promotants” on Farmland brand pork sold in several states. We reported those to the USDA in June 2012, and the agency told us it’s working with those companies to take “appropriate actions.” When we checked in early November, Sprouts had removed the claim from its packages.

What About Organic Pasture Raised Pork?

While this pork is obviously going to be much better for you to consume, it is very hard to find, and still poses certain health concerns. Pasture raised pork is very susceptible to Trichinella spiralis infection, also known as the “pork worm.” Trichinella is one of the most widespread parasites in the whole world, it has the potential to cause some very serious health concerns. Trichinella can be killed in the cooking process but one has to follow guidelines closely to make sure the meat is cooked through.

It is said that pork can be a “healthy” meat, but this entirely depends on how it was raised as well. Most, if not all of the pork most of us consume, is factory farmed. According to research by Dr Mercola: “So for most all industrially raised pork, I believe there is enough scientific evidence to justify the reservations or outright prohibitions in many cultures against consuming it. Nearly all pigs raised in the U.S. come from Concentrated Animal Feeding Operations, or CAFO’s. These inhumane environments are typically toxic breeding grounds for pathogens.

These animals spend their short, miserable lives on concrete and steel grates. Antibiotics are given liberally with their feed, making their massive waste even more toxic.

This is why you can smell a CAFO swine operation miles before you see it. At an operation like Joel Salatin’s, you couldn’t smell any sign of pigs. These pigs were raised humanely and organically, where both animal and land are managed symbiotically.

Unfortunately, raising animals in CAFO’s is the standard for Americans. For many of us, CAFO pork is the only option available.

Granted, the occasional consumption of pork might be fine, but it’s a risk, and the more you consume it the more likely it is that you will eventually acquire some type of infection.”

It’s a sad fact that 97 percent of all pigs in the United States today are raised in factory farms. This means that these pigs will never get to run on grass, breathe fresh air, or play in the sun. They are cramped and crowded into huge warehouses and fed a diet largely consisting of drugs and antibiotics to keep them alive and to encourage rapid growth.

If pigs were given the sufficient space that they need, they wouldn’t be soiling the areas where they sleep and eat, but in the factory farms the pigs have no choice but to live in their own feces, urine and vomit. Because of this, many (about 1/4) of pigs suffer from mange, an extremely itchy painful rash that doesn’t go away.

Sadly, because of the conditions the pigs are forced to live in they are inhaling toxic gas such as ammonia that comes from the urine and feces, this gas irritates the animals lungs to the point where over 80% of the pigs raised in the U.S. have pneumonia at the time of slaughter.

The horrors that these creatures have to endure on factory farms goes on and on, what was mentioned here is just the tip of what is actually going on behind closed doors.

What Can We Do?

If you insist on eating pork, do so extremely sparingly, and if you can, make sure that it is raised without the use of antibiotics, hormones and other chemicals, that it has been raised on a pasture and fed a healthy diet.

You have a right to choose, so choose wisely. Every single day you make a choice of what you are putting onto your fork.