Bangalore. July 26, 2012. Autorickshaw drivers in Bangalore do not enjoy the best of reputation. People rather detest them for their behaviour bordering on arrogance and a lack of concern for the hapless commuters.

Which is why even a small act of virtue such as polite conduct by auto drivers makes the news. But wait, here’s an example which would surely make you change your opinion about auto drivers.

Salaam Centre, a City-based NGO known for its ‘Quran For All’ programme, has launched a unique scheme to introduce Allah’s message and the life of Prophet Muhammad (PBUH) to non-Muslims.

After a successful campaign through outdoor hoardings and participation in various book fairs including the International Book Fair at Delhi, Salaam Centre has now set out on a mission which should certainly be praised for its creativity. The NGO is using auto drivers as a liaison to spread the word of Allah to non-Muslims. 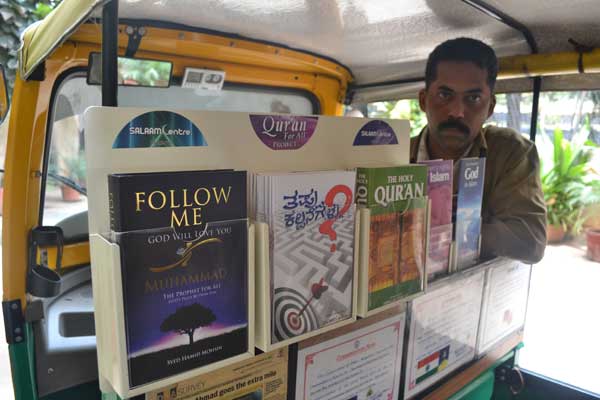 THE ‘DIVINE COURIER’: Nisar Ahmed poses with the box containing Islamic literature in his autorickshaw.

THE ‘DIVINE COURIER’: Nisar Ahmed poses with the box containing Islamic literature in his autorickshaw.
To begin with, it has fixed scientifically designed metallic boxes right behind the driver’s seat in 50 autos. These boxes contain leaflets on such topics as the Oneness of Allah (Tawhid), introduction to the life story of Prophet Muhammad (saws) (Seerah), Life After Death (Akhirah), Hijab, Islam and terrorism, etc. A book on removing common misconceptions about Islam is also provided. The topics of literature keep changing every month.

Passengers are encouraged to pick the leaflets during travel. Syed Hamid Mohsin, Chairman, Salaam Centre, says the response has been “amazing”. “We are tempted to believe that it’s a simple yet affective way of removing misconceptions about Islam and bringing Muslims and followers of others religions closer,” Mr. Mohsin said.

Passengers who show interest in reading more on Islam are given a Quran gift box that contains a copy of the Holy Quran, ‘Follow me’ – a biography of Prophet Muhammed (s), and another book on Islam. The gift box is delivered to their address after they fill a simple form.

The scheme was formally launched by Mr. Mohsin at the Richmond Road branch of Salaam Centre on July 22. “The Indian society is in desperate need of a communication between the two communities. Non-Muslims are eager to know about Islam and the life of Prophet Muhammed (saws),” he explained.

At the launch programme, Salaam Centre also screened a documentary on the response of non-Muslims recorded at various ‘Quran for All’ pavilions.

Nissar Ahmed, an auto driver from D.J. Halli, was the first to support the initiative. His friends soon joined. Their spirit is commendable. Mr. Ahmed already boasts of an award. The Commissioner of Bangalore City police presented him the award of the most honest auto driver.

Mr. Ahmed lost his father while his mission was in progress. But he didn’t lose sight of his objective, according to Akbar Ali, President and CEO, mPower. 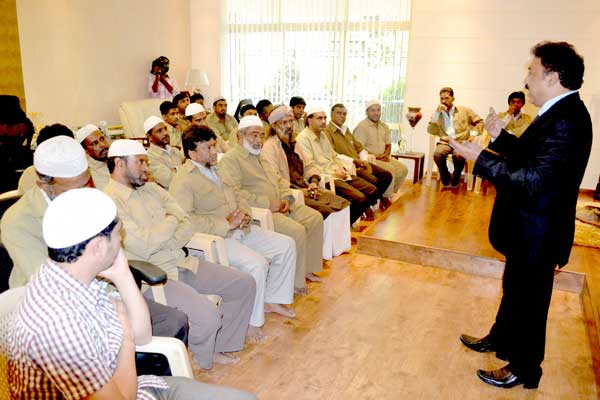 Syed Hamid Mohsin, Chairman, Salaam Centre, addresses auto drivers at a training programme in Bangalore.
One day, Mr. Ahmed was with Mr. Akbar busy in this mission. They finished the work at 10.30 pm. The next morning, Mr. Akbar found him in the graveyard. He learnt, only to his surprise, that Mr. Ahmed’s father died at 7.30 pm the previous day when they were at work! Mr. Ahmed knew the fact but preferred Allah’s work to his father’s funeral. He reached his house only after the work was completed. “We all need to salute him for his commitment to Allah’s cause,” Mr. Akbar said. “It was time we compared our commitment with his. Dawah requires sincerity, dedication and devotion of the highest order.”

Khader Basha is another auto driver who has wholeheartedly supported the endeavour. He says the initiative is benefitting him more than his passengers. “It has actually helped me to be upright in my daily life. Now many a time I feel ashamed to fleece customers,” he said.

These ‘divine couriers’ have many interesting anecdotes to narrate. Hafiz Mohammed Sadiq, another driver, recalls a Hindu priest once boarded his three-wheeler. During the travel, he read the pamphlets and was impressed. “Today I happened to take an auto as my car broke down. I am amazed by the way you are spreading the message of Islam,” he remarked and sought a copy of the Kannada translation of the Quran.

Mr. Basha has a similar story to narrate. A man boarded his auto from Hebbal to be dropped to a far-off place. He also picked many leaflets during the travel and quickly glanced at them. He evinced interest in reading more. He had a few questions for Mr. Basha and asked him if he could deliver a copy of the Quran.

Mr. Basha was more than happy to oblige him the very next day. When he reached the man’s house, he was offered Rs. 1,000 which he declined. “Sir, let me take the reward in the Hereafter.” The man was stunned by Mr. Basha’s reply. “My only request to you is to read and understand it and convey its message to your family and friends. I’ll be more delighted if you introduce this Quran to your friends and give me an opportunity to gift a copy to them as well,” Mr. Basha told him.

Mr. Ahmed was once followed by a police patrol vehicle and had to stop his three-wheeler at Vellara Junction. A thousand worries struck him. He went up to the policeman in the patrol vehicle and asked about the matter. The policeman replied. “Nothing. I just wanted a copy of ‘Tappukalpanegalu’ (a book on misconceptions about Islam). I had once seen it while on VIP duty. I’ve since then been looking for it. When I saw the book in your auto, I started following you.”

The efforts of these auto drivers and Salaam Centre should be emulated all over the State. Other Muslim NGOs can also adopt this simple yet effective way of introducing Islam to non-Muslims.