1. The Meaning of the Holy Qur’an. Translated by ‘Abdullah Yusuf Ali. Amana Publications.

Strengths: It is very easy to get, the deluxe edition contains the Arabic text and has very nice  commentary. It is a standard translation used all over the world. You can also find this translation with a transliteration sometimes.

Weaknesses: The English translation is in old style English, some translated passages are not clear. Cost: Between $10 and $20 depending on the size and style of printing. 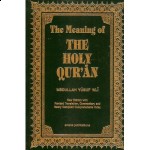 Strengths: The English is sort of easy to read except for the annoying and endless parenthetical notes.  It has the Arabic text printed very sharply.  It’s accuracy is good.

Weaknesses: The translators have put some of their own opinions in the footnotes and  parenthetical notes in the translated text that are not necessarily true. For example, they give  the impression that women are not allowed to pray in the Masjid (Mosque) and that face-veils and  gloves are required for Muslim women to wear. Both of these things can be proven wrong by the  sayings of the Blessed Prophet. But besides a few seemingly anti-women oriented opinions, the translation reads  smoothly.   Cost: The book comes in many sizes from tiny to large. Prices vary from $10 to $30.

Strengths: It is available everywhere, oftentimes for free.

Weaknesses: The English is so hard to understand that it’s almost impossible to read.  Cost: Free up to $20.

Strengths: It is in fairly modern English.  It is attractively printed.

Weaknesses: The English is often awkward and there are many unusual words used, e.g. sprites, etc…  Cost: $10-$30.

5. The Holy Qur’an as Explained by Allamah Nooruddin. Translated By A. and A. Omar.

Strengths: The book is nicely printed with a leather cover.  It “feels” holy because of its meticulously designed presentation.  The translation is very, very clear. Much clearer than any other translation.

Weaknesses: Some of the translated verses are not entirely accurate to the meaning or understanding of the majority of Muslims. The translators belong to a sectarian group outside of traditional Islam.  Cost: $10-$20.

6. The Message of the Qur’an. Translated by Muhammad Asad. Dar ul Andalus.

Strengths: This is the most comprehensive, single volume translation and tafseer you will ever find in one volume in English. It is excellent, to put it mildly, if your interest is to understand the context of revelation and the fine details behind Qur’anic teachings.

Weaknesses: It is a hard to find book.  Some of the tafseer glosses over more difficult concepts making it harder to understand what is actually being said.  It is Hardcover only and is 8.5 X 11 inches in size.  Cost: About $50.00 on average.

7. Towards Understanding the Qur’an. Multiple Volumes. Translated by A.A. Maududi and Zafar I. Ansari.

Weaknesses: It comes in multiple volumes. The cost is high and not all volumes are available yet, but it is worth the money as far as detailed learning is concerned.  A one volume translation is now available.

9.  The Qur’an.  Translated by Muhammad Farooq Malik.  (of Texas)

This translation has been chosen as the easiest to read by various groups of Muslim teenagers I have presented it to.  Although there is no index and the introductory notes are not as detailed as other translations, it is probably the best translation to give to native speakers of English and to Muslim teenagers.

Strengths:  Clear, easy to read style.  Teenagers prefer its language to any other.
Weaknesses:  No index, odd notes placed within the text, odd style of numbering verses and over-wordy Surah introductions.  The organization is sometimes unclear and the size of the book is too large and unwieldy.

Strengths:  This is a fairly clear translation in English.

Weaknesses:  It reads a bit dryly at times, and the grammar choices are sometimes awkward.  There isn’t really any peripheral material such as a good index, glossary, etc…

11.   A Journey Through the Holy Qur’an.   Translated by Yahiya Emerick.

Strengths:  This work is in the easiest to read English (without being simplistic or demeaning to the reader.)  It has a huge amount of background information that gives reasons for revelation in detail, as well as historical information on the development of doctrines, ancient peoples referenced in the Qur’an and more.  IFNA

Weaknesses:  Awaiting outside reviews for impartiality.