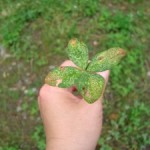 If we plant the seeds in people gently, we never know if and when God will cause these seeds to sprout and eventually bear fruit.

I was attending the Friday Prayer at a certain mosque once. In the back corner, I noticed two teenage girls sitting side by side, whispering and giggling throughout most of the khutbah (sermon). It was slightly distracting, but nobody made a fuss about it—except one older woman who was eyeing them with anger the entire time.

As soon as the prayer ended, she marched toward them and towered over their small bodies. ‘You can’t talk during the Khutbah!!’ she yelled at the top of her lungs. You could see the utter humiliation on these girls’ faces, as they lowered their heads and peered at all the spectators observing this embarrassing scene. After that woman’s verbal beating, I knew that immediate damage control was in order if these girls were to ever step foot in the mosque again.

It pains me to see how much aggressive behavior is unleashed on fellow sisters and brothers, all in the name of correcting wrongs, or enjoining good and forbidding evil. Islam is not a religion with a strict code of rules that needs to be imposed upon people.

We forget that we are dealing with dignified human beings, who have delicate souls, hearts, emotions, and feelings. They are not inanimate objects on a factory belt, where they can be thrown around, cleansed and polished so the perfect ‘halal’ (appropriate) end product pops out.

Each person has a unique life story, and every story has its struggles and difficulties; some people might be converts, or are just starting to learn about their religion. Others might not have had parents who taught them Islam, or parents who imposed religious practices upon them until they felt suffocated and constricted. There are also people who feel lost and are searching for guidance, and there are those who committed major sins and want to repent.

All these people have one thing in common: they want to feel love and acceptance. They don’t want to be humiliated or looked down upon. They want to be dealt with patiently, and they want a secure, nourishing environment to grow in. They want to see warm, inviting smiles that draw them closer to God and to the Muslim community. They want kind words of encouragement and support that inspire them to follow the Prophetic way in their worships, speech and character.

The Prophet (peace be upon him) never sugar-coated the truth or stopped calling to the way of Allah Subhanahu wa ta`ala (Exalted is He). Yet, it was his soft, gentle approach that made his message so palatable and soul-satisfying. The Qur’an testifies:

So, by the mercy of Allah [O Muhammad], you were gentle with them—and had you been harsh or hard-hearted, they would have dispersed from around you. So, pardon them, and ask forgiveness for them and consult them about matters… (Aal `Imran 3:159)

Look at the beautiful advice of the Prophet: “Make matters easy, and do not make them difficult; and give glad tidings and do not turn people away.” (Al-Bukhari)

We give gifts to people because we care about them; it is one of the ways we show love, gratitude or appreciation. We also choose gifts that people enjoy or that would improve the quality of their lives. Can you imagine telling someone: ‘Hey, I have a gift for you’, and then throwing it in their face, leaving them bruised and not wanting anything to do with you or your gift?

Think about our da`wah (outreach) efforts and advice as gifts. We want people to love Allah (Exalted is He) more and to develop an overwhelming desire in the heart to please Him so they can be successful in this life and the hereafter.  If we want our gifts to be received graciously—if we want people to pray on time, or to gain the full reward of the Friday prayer by listening quietly, or to cover more modestly, or to quit bad habits—we need to present these gifts more gracefully and adorn them with gentleness and a loving tone.

If our goal is to please God, and not to flex our knowledge muscles or put people down to boost our egos, it is crucial that we pay as much, if not more, attention to how we say our words as to what we say.

There is another problem on the other side of the spectrum; some people have such a high regard for people’s feelings that they refrain from giving advice completely. They themselves might be afraid of being rejected, causing conflict, or not having adequate knowledge. They could also feel that they are not in a place to start pointing out other’s faults or mistakes because they themselves are sinful Muslims.

Part of being one Ummah (community of Muslims) is to care about our brothers’ and sisters’ relationship with our Creator, and to support them in their religious and spiritual growth. Also, the basics of the religion are known, so it does not require much knowledge to encourage good deeds. Our beloved Prophet advised: “Convey on my behalf, even if (just) one verse”. (Al-Bukhari)

There is no denying that actively calling to Allah’s way is difficult. People are generally insecure about their shortcomings, and they do not enjoy having a mirror put in front of them that highlights their blemishes. People might respond to our advice rudely or even harshly, making us feel belittled or dismissed at times. That is a common theme, though, with people who devote their lives to the calling.

Look at the stories of the prophets and messengers, and how they endured their people’s criticisms and rejection. They were mocked, ridiculed and physically attacked, but they never quit. The value of conveying the message outweighed the physical or emotional pains that any of them experienced individually.

The key in advising people is to strike a balance. Encouraging God-consciousness and piety is praiseworthy, but it must be adorned with tact, kindness and humility. People need to feel that we care about them and are not just being judgmental or critical. For people to feel that positive, loving energy, we need to be sincerely aiming to please God and wanting the best for His servant-worshippers.

It is important to remember that guidance ultimately comes from God. If we plant the seeds in people gently, we never know if and when God will cause these seeds to sprout and eventually bear fruit. The value remains, though, in planting the seeds irrespective of the results. If God utilizes us to bring people closer to His path, and we succeed in treating people with gentleness, mercy and compassion, our reward is secured with God, by His will.