RIO DE JANEIRO – Welcoming hundreds of thousands of visitors from across the world, Muslim dawah teams took to the Brazilian streets in Rio de Janeiro and Sao Paulo to spread the true message of Islam. 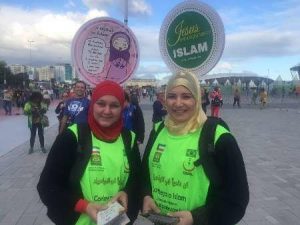 During the Olympic Games, along with my Muslim friends, we spread brochures to introduce Islam’s views on various issues.

Jamila da Lima is one of those volunteers who found Islam a few years ago and tasted the sweetness of being a Muslim, Mehr News reported on Friday, August 12.

Cooperating with other Muslims, she is sparing no effort in introducing Islam to non-Muslims and inviting them to the beneficent religion.

“During the Olympic Games, along with my Muslim friends, we spread brochures to introduce Islam’s views on various issues, including women, and respond to people’s questions to resolve their uncertainties,” underlined Jamila.

During the Olympic Games, which run from August 5-21, teams stood outside Arena Corinthians Stadium to talk to fans.

They also handed out brochures including Islam’s view of Christianity and introducing the Qur’an and Islamic centers of Brazil.

Da Lima noted that the majority of visitor’s questions revolve around halal and haram food.

She added that nearly two million Muslims are currently residing in Brazil, with shortage of halal meat being one of the major problems facing them.