Anonymous letters were distributed last week in a number of cities around the UK.  Inside plain white envelopes with second-class stamps were horrid messages calling on people to verbally and physically attack Muslims. 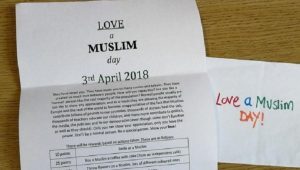 The letter encourages people to do nice things for Muslims and people in need, on the same day – April 3.

The message said that April 3 would be “Punish a Muslim Day,” and that points would be awarded for various acts of violence targeting Muslims and Muslim places of worship, including a nuclear attack on Makkah: 25 points for pulling off a woman’s head scarf, 500 points for murdering a Muslim and 1,000 for bombing a mosque.

Muslim MPs have also received packages containing anti-Muslim letters to their parliamentary offices. This has stirred fear across UK.

‘Punish a Muslim day’ has been making its way through social media and has even hit the international press.

Counterterrorism Police are investigating the sickening campaign calling for a day of violence and abuse.

There are more than 2.5 million Muslims in Britain, where Islam is the second-largest religion.

A British Muslim activist is trying to turn around the anti-Muslim hate campaign, encouraging interfaith allies to shower Muslims with love in response to the racist “Punish a Muslim” letters.

A new poster, entitled Love A Muslim Day, has been put together directly contrasting the original campaign – and has gone viral among people disgusted by the racist printout.

It encourages people to do nice things for Muslims and people in need, on the same day – April 3.

Shahab Adris, from Leeds, said he was disgusted at the content of the widely-reported letter.

“I thought, let’s turn this letter on its head, keep the points system and turn it into something lovely,” he said.

“Some of the responses I’ve seen from the Muslim community have been really positive, but the most remarkable thing has been getting responses from people who are not Muslim. Some non-Muslims have pledged to take Muslim colleagues out for coffee and cake.”

“As a Muslim, we’re always wanting to bring people together and love everyone regardless of their background – it could be love a Jew day, love a Christian day, love an atheist day, love a human day,.” Mr Adris told BBC Radio Leeds.

In direct contrast to the original poster it reads: “They have loved you. They have made you so many curries and kebabs. They have created so much love between people. How will you repay this?

“Be a normal person. Be a special person. Show your love!”