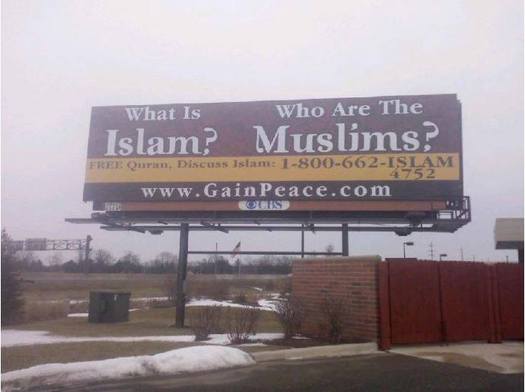 NOVI, Mich. – Drivers on some Michigan highways may have noticed billboards offering the chance to “Gain Peace,” discuss Islam, and obtain a free copy of the Muslim holy book. It’s all part of an Islamic outreach group’s attempt to change the conversation about the religion.

Dr. Sabeel Ahmed is the director of the Gain Peace campaign, which he said is not about trying to convert anyone, but simply an educational effort.

“We want to make sure that wework on the commonalities that there may be between Islam, Christianity, Judaism, and other faiths,” he said. “If they are activists in the church or in the synagogue, we would like to work with them for the betterment of the society.”

Gain Peace is a national organization supported by the Islamic Circle of North America. In addition to the billboards, the group has taken out newspaper, television, and radio ads in different parts of the state.

Ahmed said that, despite Michigan being home to one of the largest Muslim populations in the country, there are still many misconceptions about the religion and what he described as a certain degree of “Islamophobia” in the state. He said the response to the campaign has been largely positive.

“Not only (do) we have our Christian friends and our Jewish friends calling, we’ve also had a few atheist people who are calling, and they want to know who is doing this, and they want to engage with us about discussing topics within Islam,” he said.

According to FBI statistics, hate crimes against Muslims nationally jumped 50 percent in 2010 and remain at what the Bureau calls “relatively high levels.”