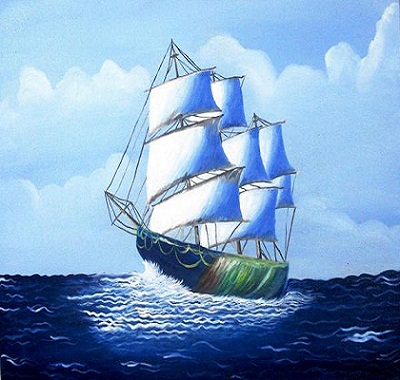 Islam spread by manners and morals.

To call people to Allah is the duty of every responsible and conscientious Muslim. Since there is no priesthood in Islam or sacerdotal class among Muslims, the duty of the call to Allah cannot be limited to an ill-conceived and imaginary group called the “men of religion”, as is the case with some other religions. In Islam, everyone is a man or woman of religion and everyone will be accountable to Allah as to whether or not they fulfilled their obligations sincerely and to the best of their abilities.

Urging Muslims to own up to their responsibilities in this respect, Almighty Allah says:

And who is better in speech than one who calls to Allah and does righteousness and says, “Indeed, I am of the Muslims.” (Fussilat 41:33)

Therefore, one need not be a profound scholar or a great jurist to call others to Islam. A Muslim should better be a caller to Islam by his good conduct than by eloquent oration, for to preach others to do something not practically embodied in the preacher’s character is a vain attempt to win hearts and minds. Moreover, doing so incurs the displeasure of Almighty Allah, Who says:

The adage “actions speak louder than words” was well embodied in the Islamic history, namely the spread of Islam in many non-Muslim countries — like parts of Asia, Africa, and Europe — through the good conduct of Muslim merchants who came into commercial contacts with the people of those countries.

Hereunder is a brief survey of that peaceful spread of Islam:

By the 14th century CE, as Islam made its way through Indian and Chinese merchants into the area of today’s Malaysia, Buddhist and Hindu influences gave way. Islam became the source of legitimacy for the Malay feudal rulers. It was during this period that Islamic and Malay identities combined together, though many Hindu and pre-Hindu customs and practices remained part of the Malay cultural and social mix.

Muslim influence in Southeast Asia is at least six centuries old, i.e., it was present by 1400 A.D. Some argue that the Islamic presence there goes back to at least 1100 A.D. in the earliest areas of Islamic influence, such as in Aceh and northern Sumatra in Indonesia. Whatever exact dates and sources one chooses to support, there is no doubt that the acceptance of Islam by many nations in present-day Malaysia, southern Thailand, Indonesia, Brunei, and the southern Philippines occurred within a few hundred years.

In the year 1500, the historian Anthony Reid notes, the Islamic influence was present in coastal ports of Sumatra, Java, and Malaysia. Southeast Asian peoples came into direct contact with Muslim traders who had been not just to India, but also to Arabia. Arabic scholars also came to Malaysia and Indonesia, facilitating information about the new religion.

The successful spread of Islam in Indonesia, Malaysia, and the Philippines owed much to the introduction of the noble Qur’an and other Islamic books and references.

The growth of cities was both a cause and effect of the spread of Islam and economic growth in Muslim-ruled areas in Africa. Cultural developments in literature, arts and sciences, and manufacture and trade accompanied the spread of Islam and its influence on religious, intellectual, economic, and political life in those regions.

Although unified Muslim rule lasted only about a century, Islam kept spreading and Muslim culture and society flourished.

Before 1500, Islam spread widely in sub-Saharan Africa. The first town south of the Sahara that became majority Muslim was Gao, on the Niger River in Mali, before 990, when a ruler accepted Islam. Over the centuries, many rulers followed. By 1040, groups in Senegal became Muslims. From them Islam spread to the region of what is today Senegal, west Mali, and Guinea. After the Soninke of the Kingdom of Ghana became Muslims about 1076, Islam spread along the Niger River.

Muslims established the kingdom of Mali in the 13th to 14th centuries, and Songhai from1465 to 1600. Farther east, Kanem-Bornu near Lake Chad became Muslim after 1100.

In West Africa, as was the case with Southeast Asia, it was traders who introduced Islam, and many rulers accepted it first, followed by others. African Muslim scholars became established in the major towns, like Timbuktu, and they taught, wrote, and practiced Islamic law as judges. Islam was established in West Africa throughout the Sahel belt and along the Niger River into today’s Nigeria.

It was famous trade routes which led to the empire of Ghana and connected prominent African places like Timbuktu (in Mali), present-day Nigeria, Tripoli, and Tunisia. These routes turned all the above mentioned places into famous trade centers, which consequently became centers of Islamic learning and civilization. New ideas in the field of administration also came with visiting traders.

In East Africa, traders had spread Islam down the coast by the 10th century, and it gradually developed further in the following centuries. In the Sudan, south of Egypt, the population of Nubia gradually became Muslim during the 14th century through immigration of Muslim Arab tribesmen. Muslim rule and influence, however, did not extend south of Khartoum, where the Blue and White Niles run, before 1500.