What is da`wah to Muslims? The blessed Prophet (peace be upon him) said, “Seek out your brothers for these three things: If they are sick, visit them; If they are busy, help them, and if they have forgotten, remind them.” (Mishkat) 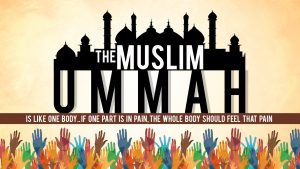 “The believer is to the believer like parts of a building, each one of them supporting the other.”

Muslim thinkers through the ages have said that the world is divided into two camps: the abode of Peace (Islam) and the abode of Conflict (non-Muslim world). This boundary cannot always be easily discerned. Within each camp itself there are vast differences of strengths and convictions.

There are People of the Book who can be entrusted with a mountain of gold, as well as others who wouldn’t return a dime.

Likewise, there are Muslims who are excellent in character and others in need of serious reform. Practicing Muslims should be encouraged with inspiring da`wah and any wayward Muslims should be called back to the straight path. This is da`wah  to Muslims.

Prophet Muhammad declared that Muslims are one community: “The believer is to the believer like parts of a building, each one of them supporting the other.” (At-Tirmidhi)

Part of the duty of an inclusive group is to look after the welfare of its members, in both their physical and metaphysical needs. North America, for example,  presents a paradox for us. Though our numerical, statistical population seems to be constantly on the rise, so many Muslims seem to needlessly pass out of the Ummah under the influence of a meaningless materialistic society. Allah declares that the only successful people are:

…those who believe, work righteousness and who teach each other truth and perseverance. (Al-`Asr 103:3)

Now it becomes necessary to describe the different categories that Muslims can be grouped into.

The first is of the good Muslims who believe and practice all the requirements of the faith. They are, in most cases, the ones who will be calling others to Allah. Da`wah to them is reinforcement of Islamic brotherhood and values. These are “Practicing Muslims”.

The second type of Muslim covers those who are sincere in their belief but sometimes weak in their practice or level of commitment. They must be helped to develop a greater level of conviction. These are known simply as “Trying Muslims.”

A third category is that of people who call themselves Muslims but who view Islam more as something of a cultural identity. They are married in the masjid, observe Ramadan, wear traditional outfits and take comfort in a misty sense of certainty, even if they rarely attempt to define their faith. These are by far the most numerous kind of Muslim. Their allegiance to the concept of Islam is strong, but their endurance tends to be weak. These are “Cultural Muslims”.

And the last category is that of people who neither practice Islam nor who know much about it. They almost always come from Muslim families, have Muslim names, and would not identify themselves as non-Muslims.

It is this sort of person who is likely to believe ardently in socialism, secularism, western-style democracy or some other “ism” and is filled with revolutionary zeal for a materialistic goal. A worldly cause becomes their true religion, whether the cause is the general good as they see it or merely themselves. This describes those who are usually in power in Muslim countries.

Given that most Muslims today are in need of da`wah to one extent or another, what sort of approach should be adopted? We require a model to guide us, and the example of Medina is an excellent place to start. Surat Al-Hujurat (the 49th chapter of the Qur’an) provides a synopsis of how inter-Muslim relations should be conducted.

The early Muslims, may they be blessed, attended to one another. A gentle but firm peer pressure was applied in the community to maintain desired norms and behavior. Even the hypocrites were forced to comply or risk being alienated from the community. We need to reactivate this force in our social life. Gently encourage your brothers and sisters with good admonition but do not mindlessly condemn:

And hold fast by the covenant of Allah all together and be not disunited, and remember the favor of Allah on you when you were enemies, then He united your hearts so by His favor you became brethren; and you were on the brink of a pit of fire, then He saved you from it, thus does Allah make clear to you His communications that you may follow the right way. (Aal `Imran 3:103)