In the Qur’an, God Almighty sternly warns mankind against corrupting His revelation:

Then woe to those who write the Book with their own hands, and then say: “This is from Allah,” to traffic with it for miserable price! Woe to them for what their hands do write, and for the gain they make thereby. (Al-Baqarah 2:79)

Please note that it is a pillar of faith for us as Muslims to believe that Jesus, a great Prophet of God, received revelation known as the Injeel (Gospel).

Muslims believe, from both a theological and (as will soon be demonstrated) historical point of view, that the Gospels we have today are not the same as what was originally revealed to Jesus, peace be upon him.

The Manuscripts: The Facts

– There are almost 6000 Greek manuscripts of the New Testament, with no two pages being identical. This is according to The Interpreter’s Dictionary of the Bible:

“There is not one sentence in the New Testament in which the manuscript tradition is wholly uniform.”  (G. A. Buttrick, The Interpreter’s Dictionary of the Bible)

Faced with a massive number of variant readings, how do Christian scholars go about determining what may be the word of God? Editors must decide which variants will be included in the text.

Textual scholars have developed criteria of evaluation. These considerations depend upon probabilities. Sometimes the textual critics must weigh one set of probabilities against another.

The range and complexity of textual data are so great that no mechanically derived set of rules can be applied with mathematical precision. Each and every variant reading needs to be considered in itself and not judged according to a rule of thumb.

So, ultimately it’s editors that decide what goes into the New Testament, not Matthew, Mark, Luke and John!

Can We Be Confident about the New Testament?

– It’s true that we have lots of copies of the originals, in fact more than any other book in the ancient world.

– As was demonstrated earlier, unfortunately what we don’t have are lots of accurate copies.

– Many Christians will assert that these mistakes are negligible because they amount to minor spelling and grammatical mistakes which are of no theological consequence.

– It’s true that majority of differences between manuscripts are down to spelling mistakes and similar scribal errors, these types of error can be ignored because of the nature of creating manuscripts by hand.

– However, deliberate additions and subtractions cannot be ignored. The famous Alexandrian scholar Origen was aware of the corruption of the New Testament even as early as the 3rd century:

“…the differences among the manuscripts (of the Gospels) have become great, either through the negligence of some copyists or through the perverse audacity of others; they either neglect to check over what they have transcribed, or, in the process of checking, they lengthen or shorten, as they please.” (Bruce Metzger, The Text of the New Testament: Its Transmission, Corruption, and Restoration)

– The Codex Vaticanus, one of the oldest surviving manuscripts of the Greek Bible, has a fascinating scribal comment in the margin which provides great insight into these corruptions. 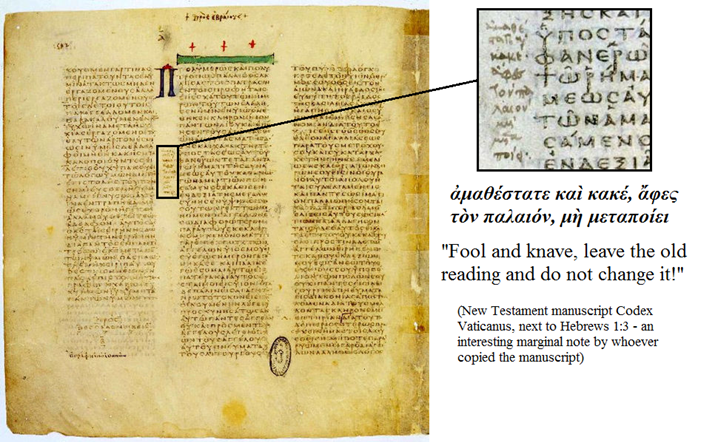 Examples Of the Corruptions

Contrary to Christian claims, there are many examples of changes that have important theological implications. Here are a few examples:

“For there are three that bear record in heaven, the father, the word, and the Holy Ghost: and these three are one.” (1 John 5:7)

The above verse, known as the Johanine Comma, contains the only clear reference to the Trinity in the New Testament, and yet does not appear in any New Testament manuscript before the 16th century.

In other words, it is a fabricated verse that was inserted into the New Testament over 1,500 years after Jesus.

This verse used to be in all Bibles; however the Revised Standard Version (RSV) and New International Version (NIV) have removed the verse as it is a known fabrication. The King James Version (KJV) has grave defects, and so these newer versions of the Bible (which are based on older and hence more reliable manuscripts) were produced. Here is the NIV footnote regarding this verse:

Late manuscripts of the Vulgate testify in heaven: the Father, the Word and the Holy Spirit, and these three are one. {8} And there are three that testify on earth: the (not found in any Greek manuscript before the sixteenth century)

Compare the RSV and NIV versions to the KJV version, which still contains the Johannine Comma in the picture below: 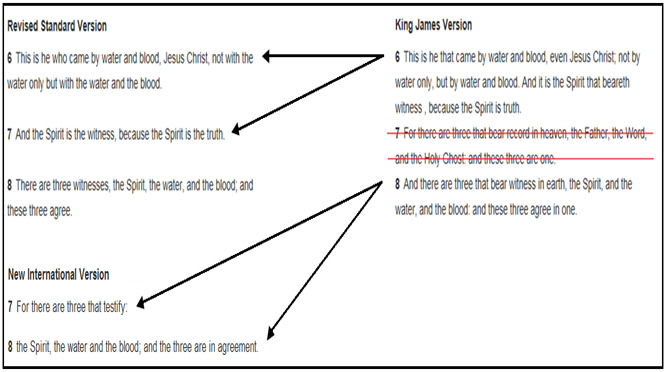 The RSV and NIV have had to split other verses into two parts in order to make up for the deletion of the Johannine Comma, this is so that the verse numbers across all three versions of the Bible line up the same.