Prophecies of Prophet Muhammad in the Bible (1/3)

Prophecies of Prophet Muhammad in the Bible (2/3)

Muhammad’s experience in the cave of Hira’ (later known as Jabal An-Nur – the Mountain of Light), and his response to that first revelation is the exact fulfillment of another Biblical prophecy. In the Book of Isaiah, we read, 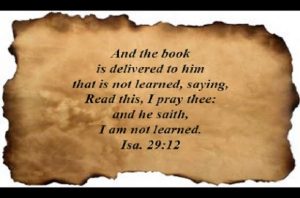 It is a well-known fact that Prophet Muhammad (peace be upon him) was unlettered;16 he could not read or write. He was described in the Qur’an as the unlettered Prophet.

Those who follow the messenger, the unlettered Prophet, whom they find mentioned in their own (scriptures),- in the law and the Gospel;- for he commands them what is just and forbids them what is evil; he allows them as lawful what is good (and pure) and prohibits them from what is bad (and impure); He releases them from their heavy burdens and from the yokes that are upon them. So it is those who believe in him, honor him, help him, and follow the light which is sent down with him,- it is they who will prosper.

Say: “O men! I am sent unto you all, as the Messenger of Allah, to Whom belongs the dominion of the heavens and the earth: there is no god but He: it is He That gives both life and death. So believe in Allah and His Messenger, the Unlettered Prophet, who believes in Allah and His words: follow him that (so) you may be guided.” (Al-A`raf 7:157-158) s

Nor does he speak from (his own) inclination. It is not but a revelation revealed, taught to him by one intense in strength. (An-Najm 53: 3-5)

“Sing unto the Lord a new song, and his praise from the end of the earth, you that go down to the sea, and all that is therein; the isles, and the inhabitants thereof.

Let the wilderness and the cities thereof lift up their voice, the villages that Kedar does inhabit: let the inhabitants of the rock sing, let them shout from the top of the mountains.” (Isaiah 42:10-11).

More explicitly, the Book of Isaiah mentions, “For with stammering lips, and another tongue, will he speak to this people…” (Isaiah 28:11) This latter verse correctly describes the “stammering lips” of Prophet Muhammad (peace be upon him) reflecting the state of tension and concentration, as well as of unfamiliarity, that he went through at the time of revelation.

A related fact is that the Qur’an was revealed in sections over a span of twenty-three years. It is interesting to compare this with Isaiah 28 which speaks of the same thing, “For it is: Do and do, do and do, rule on rule, rule on rule; a little here, a little there.” (Isaiah 28:10)

Deuteronomy 18:19 reads, “And it shall come to pass, that whosoever will not hearken unto My words which he shall speak in My name, I will require it of him.”

This prophecy in Deuteronomy has mentioned that this prophet will speak the words of God starting with the name of God. If we look at the Qur’an, we will find that all its chapters, except chapter 9, are preceded or begin with the phrase: “In the Name of God (Allah), the Most Gracious, the Most Merciful.”

The very first passage of the Qur’an revealed to Prophet Muhammad reads:

Furthermore, Islam also teaches people to start almost every action in their daily life with the words: “In the name of Allah, Most Gracious, Most Merciful,” which is in accordance with the teachings of Prophet Muhammad (peace be upon him).

As mentioned earlier, the name ‘Allah’ is how He refers to Himself in the Qur’an, and how Prophet Muhammad (peace be upon him) always referred to him. To say, “in the Name of Allah” is a far clearer fulfillment of the prophecy: “He shall speak in My name,” than other common expressions such as “In the name of God” or “In the name of the Father.”

‘The Father’ here is an example of the serious distortions in the Bible. Allah has said about Himself: