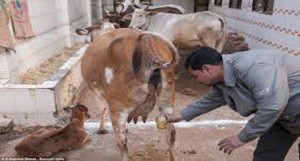 No function can be spiritually and religiously successful in Hindu society without the use of cow dung and its urine.

Cows have been regarded as a god in Hindu scriptures. The medical aspects of cow dung and its urine would not be addressed here. We will concentrate here only on the religious aspect of cows in Hinduism. It is noteworthy that most of the Hindu researchers move with religious sentiments when they carry any research on the medical importance of cow excreta, trying to prove medical values of   them. However, majority of doctors are divided about the medical benefits. Some say that the curative claims have never been validated by independent experts, while some western experts have denied such medical properties in the excreta of cows.(1)

Let us shed some light on the issue of cow excreta in Hindu religion, since it has a significant respect and considerable reverence in Hindu societies. In this connection, a Hindu writer says:

“You may have seen that the place is purified first with cow dung when any religious function is held. The cakes made of cow dung are lit on fire in the fire pot. Even today, every day in the morning women in the villages smear the main door of their houses with cow dung. It is believed that this act leads Lakshmi (A Hindu goddess for prosperity) to reside in the house. Hindu saints during the ancient times used to smear their bodies with cow dung and mud and took bath. The reason behind this act was a religious one. Also the Hindu ancient scriptures or Shastras state that the goddess and mother Gnga (or Gnga Mayya) resides in the urine of cow. Furthermore, the Shastras have clarified that cow is the mother of the world. According to the scriptures, all gods and goddesses dwell in the organs of the cow. The shadow of a cow is also considered extremely auspicious.”(2)

The abovementioned passage has been translated accurately from Hindi that was written by a devout Hindu. This statement shows clearly that the reason behind various usages of cow excreta was merely religious. The cow has been regarded as the center of all Hindu deities and gods.

Cow Excreta: A Pure, Purifier and Auspicious Object in Hinduism?

Hindu scriptures regard cow excreta as a purifier and an important source of religious and spiritual blessings. No function can be spiritually and religiously successful in Hindu society without the use of cow dung and its urine; they use it just as people use perfumes and scents during special times, however, when they use cow urine they are driven by pure religious intention to get blessings of the highest god, or the mother cow (Gao Mata). In addition to that, according to Hinduism, if the earth becomes impure by any reason it should be purified by the cow excreta. A Hindu writer says in this regard: “Earth becomes pure by sweeping, by burning, by time, by a cow walking over it, by sprinkling it (with milk, cow’s urine, cow dung and water.”(3)

This quote asserts that if only a cow walks over an impure earth it becomes pure, or if the impure earth is smeared with the cow dung or cow urine it becomes pure and auspicious. However, I can not understand the secret; why an impure earth will become pure by only the walks of a cow over it? Perhaps, the reason is merely divine and spiritual as the Hindu scriptures look upon cow as the center and abode of all Hindu deities and gods.

Blessings of Cow Urine in Mahabharat

Mahabharat included many instructions and guidance on the religious usages of cow dung and its urine. People’s belief in the sanctity of the cow led them to worship it and revere even the excreta of a cow. The following citation of Mahabharat confirms this opinion, Mahabharat says in this regard:

Mahabharat regards cow as a sacred animal and mothers of all deities. Cow deserves to be worshipped every morning, its urine and dung should never be hated or detested. Cow should never be disturbed or annoyed even if it damages the property or eats from the shop or urinates in the house. Because it is the highest god in Hinduism whose advent is always a divine blessing for a lucky person. These are the instructions of Mahabharat for the respect of the mother cow or Gao Mata. But unfortunately, a human being never receives such respect and honor by the followers of Hinduism, rather, some human beings deserve all types of humiliation and cruelty in the name of caste system as we have stated in our article on the caste system in Hinduism.

Some readers may think that these norms and rituals were prevailing in ancient India and they are no more in practice in modern India, but the reality is totally opposite, we would like here to quote a news from the most famous English daily News paper, Times of India, that shows the respect of the people of India towards cow urine. The news goes on as follows:

“Around 700 woman workers of the Congress, in a unique show of protest against the BJP’s Gaurav Yatra, washed the entire 1.5-km stretch of road in the town, traversed by Chief Minister Narendra Modi’s mechanized ‘Rath’ on Monday, with cow urine. The women dressed in black, poured ‘Gaumutra’ (cow urine) from pots onto the street and then swept it clean with brooms. This they did along the stretch from Naagnath Chowk to the main bus stand.”(5)

This news verifies the existence of such acts in contemporary Indian society; it is not something that has become extinct or an obsolete past. This is an extension of the past that is based on a serious misconception about faith; rather, it is a clear deviation from the right path. Our previous statement has proved clearly that the worship of cow and the purity of its excreta is a purely religious issue and Hindus were always driven by their pure religious and spiritual sentiments.

After we have presented the quotes of Hindu scriptures on the religious and spiritual status of cow as well as the practices and norms related to this animal in Hindu societies, now we would like to examine the question of our Hindu brothers, who refer to an authentic Hadith of the Prophet Muhammad (peace be upon him) wherein he prescribed for some sick people to drink the urine and milk of camel. Hindu brothers raise objections frequently on the Hadith, during arguments on the issue of cow excreta; they try to prove that Islam also has permitted to drink the camel urine. This subject would be discussed in our coming article by the Will of Allah the Almighty.