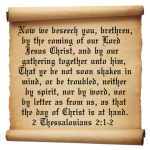 2- Ending of the Gospel of Mark

The New Testament manuscripts for the Gospel of Mark have multiple endings. The shortest ending is found in the oldest complete copies of the New Testament, known as the Vaticanus (350 CE) and Sinaiticus (360 CE), which stop at verse 16:8.

Most of the later manuscripts contain some additional verses, Mark 16:9-20, which are not always the same and seem to have been added to the Gospel at later points in time. It is these additional verses that mention the resurrection of Jesus, the bedrock upon which the Christian faith rests.

Here is the footnote regarding the ending of Mark’s Gospel from the New International Version of the Bible:

“The earliest manuscripts and some other ancient witnesses do not have verses 9–20.”

3- The Story of the Adulteress

John 8:2-11 is the story of a woman that is about to be stoned on the accusation of adultery. In these verses Jesus, when questioned about her punishment, utters the famous words “Let he who is without sin cast the first stone”.

This whole story is another later addition as the earliest New Testament manuscripts do not contain it. In fact the story does not even exist in any manuscripts before the 6th century, and the vast majority of those prior to the 8th century lack the story. Here is a footnote regarding this verse from the New International Version of the Bible:

These verses are often cited by Christians as evidence to suggest that Jesus sought to end the Old Testament laws dealing with crime and punishment.

4- The Suffering of Jesus

“An angel from heaven appeared to him and strengthened him. And being in anguish, he prayed more earnestly, and his sweat was like drops of blood falling to the ground.” (Luke 22:43, 44)

These verses paint a picture of a suffering Jesus, to the extent that he was sweating drops of blood even before his arrest and crucifixion. The theology behind it is that since Jesus was the one to redeem mankind before God, he had to suffer brutal torture and death (known as the “Passion of Jesus”) in order to cleanse mankind of their sins.

The problem is that these verses, Luke 22:43-44, are doubtful as they are missing in many early manuscripts. Here is a footnote regarding these verses from the New International Version of the Bible:

“Many early manuscripts do not have verses 43 and 44.”

A Christian response to all of these points might be that these issues only started to appear late on in history, and that none of these deliberate modifications took place during the critical early formative years of the New Testament’s composition.

This is not true, as the Apostle Paul (who was writing within a few decades of Jesus) stated that his readers should not be led astray by teachings which may seem to be from him. So Paul knew of teachings in circulation claiming to be by Paul that are not really by Paul:

“Concerning the coming of our Lord Jesus Christ and our being gathered to him, we ask you, brothers and sisters, not to become easily unsettled or alarmed by the teaching allegedly from us – whether by a prophecy or by word of mouth or by letter – asserting that the day of the Lord has already come.” (2 Thessalonians 2:1, 2)

So this shows that there were almost certainly forgeries in Paul’s name in circulation already in the first century. What should be of concern to Christians is that we can’t be certain that these early forgeries did not creep into the modern New Testament, given that it’s already been demonstrated that other forgeries have crept into the text.

The modern day New Testament is not the pure words of God as originally revealed to Jesus, but rather the corrupted words of copyists and scribes.

I invite my fellow Christians to ponder the following point. If God wanted you, and indeed the whole of mankind, to have the original words of the New Testament, then why didn’t He preserve the words? As has been demonstrated, the modern day New Testament is not the pure words of God as originally revealed to Jesus, but rather the corrupted words of copyists and scribes.

The answer to the question of why God did not preserve the original revelation given to Jesus is that it was only ever meant to be a time bound message which served as a temporary placeholder until the coming of the Qur’an.

It is only the Qur’an, God Almighty’s last and final revelation to mankind, that is timeless. God has promised mankind that He will protect and preserve the Qur’an: