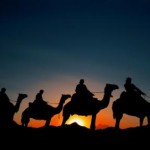 Allah joined by Islam between their hearts, united the ranks and made them brothers who love one another.

The Arabs had been, before the advent of Islam and its noble Prophet, tribes in dispute and enemies inter-fighting, no purpose assembles them and no goal unites them.

Allah has bestowed His favor upon them with this religion, so He joined by it between their hearts, united the ranks and made them brothers who love one another, collaborating and helping one another; if any of them went absent they enquired after him, and if he became impoverished they comforted him. If he were in need they aided him, and if he fell ill they visited him, and if he passed away they held a funeral for him.

Their religion is advice, and their ethics are the promotion of virtue and prevention of vice. Allah the Exalted says, in gratefulness and reminding of this fact and that reality:

And hold fast, all together, by the rope which Allah (stretches out for you), and be not divided among yourselves; and remember with gratitude Allah’s favour on you; for you were enemies and He joined your hearts in love, so that by His Grace, you became brethren; and you were on the brink of the pit of Fire, and He saved you from it. Thus does Allah make His signs clear to you: That you may be guided. (Aal `Imran 3:103)

Call to mind when you were a small (band), despised through the land, and afraid that men might despoil and kidnap you; But He provided a safe asylum for you, strengthened you with His aid, and gave you good things for sustenance: that you might be grateful. (Al-Anfal 8:26)

Ibn Kathir said: “The Almighty exhilarates His faithful servants about His favors upon them, kindness to them, where they were a few so he made them many, vulnerable and afraid so He strengthened them and supported them. Poor with dependents so He sustained them with the good things, He asked them for gratitude so they obeyed him and complied with all that which He commanded them …”.

Qatada said: “This Arab neighborhood used to be the most humiliated among people, and the most miser in living, and hungriest of bellies, and most nude of skins, and most clearly astray. Whoever lived among them, he lived in misery, and whoever died among them, he was damned to the hell fire, they are eaten and do not eat. By Allah, we knew not a group of the present inhabitants of the earth then who were of worst status than them, until Allah brought Islam and established by it in the land, and expanded by it the provisions, and made them by it kings over the necks of people, and with Islam Allah has given what you have seen, so thank Allah for his favors, for your Lord is favor-giver who loves thanks, and the worthy of thanks are in more (favors) from Allah”. (Quoted by Ahmad Shakir in `Umdat At-Tafsir)

Allah did not take His prophet to His side until after He completed for him and his nation this religion. He sent down on him months before his death during the Farewell Pilgrimage:

The completion of the religion was among the great favors of Allah upon this nation, and therefore the Jews used to envy the Muslims over this verse.

The two Sheikhs (Al-Bukhari and Muslim) narrated, according to `Umar bin Al-Khattab (may Allah be pleased with him), that a Jewish man said to him: “O leader of the faithful! A verse in your book you read, if upon us the assembly of Jews it descended, we would have taken that day a festival. He said: Which verse? He said: “Today I have perfected your religion for you and completed My favor upon you and chosen for you Islam as your religion” (Al-Ma’idah 5:3). (Al-Bukhari and Muslim)

Ibn `Abbas (may Allah be pleased with them) said in the interpretation of this verse: “Allah informed His Prophet (peace be upon him) and the believers that He completed the faith for them, so they would never need an increase ever. Allah has accomplished it, so He would never diminish it, and He has chosen it, so He would never rage His wrath on it.” (Tafseer Ibn Katheer)

The Prophet told that he has left this nation on a clear path, no one deviates away from it but he is doomed.

According to Abu Ad-Darda’ (may Allah be pleased with him) according to the Prophet, He said: “…and by Allah, I have left you such as the white path (its night and day are alike) (Ibn Majah), and in the statement of Al-‘Arbadh: “…no one deviates from it, after me, but he is doomed” (Ahmad).