The Last Arrow of Fi`rawn

Fir`awn had just one way of stopping Moses (peace be upon him) from inviting to the way of Allah and from inciting his courtiers against him. The Qur’an has described it in various ways. (Fir`awn) said to those around him: 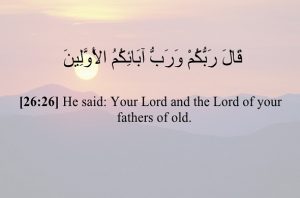 “Did you not hear, what he said? Do you not feel ashamed? Does your sense of honor not become excited? Do you not have the courage to rejoin on my behalf and stop him?” But before they could become excited and speak, Musa, peace be upon him, completed his words:

Fir`awn once again tried to laugh and to pour scorn so he said:

Fir`awn knew the human weakness that if somebody is attacked he becomes enraged. He cannot swallow fill insult.

The Qur’an graphically describes the entire environment and debate in such a manner that we can almost see and hear it. Fir`awn thought that Moses (peace be upon him) would lose his temper and say: “Am I mad? Then call a physician and get me examined by an expert.”

This was the purpose when Fir`awn imputed madness to him. Moses only ignored it and, continuing his talk, saying:

Lord of the East and the West and all that is between them, if you did but understand. (Ash-Shu`araa’ 26:28)

He did not say anything about his own self nor defend himself. He was a true Messenger of Allah for he was only enjoined with the task of inviting them to the way of Allah.

He was not to be carried away by personal attacks. These aspersions were immaterial in comparison with the noble task of calling to the truth in an environment where polytheism was widespread; where idol-worship was prevalent; where crimes and wrong actions were common; where innocent children were being killed. He therefore did not pay heed to these personal jibes and said:

This small sentence pierced Fir`awn’s heart. He thought himself to be the ‘lord, the highest’. He had the wrong notion that the world comprised Egypt and, because he ruled over it, he thought the whole world was under his thumb.

When Moses, peace be upon him, talked about the East and the West and all that lies between them, he actually challenged Fir`awn’s vainglory of sovereignty and demolished the foundation of his false godhood of which he was very proud.

That is why this particular example deserves our special attention. We can take a lesson and receive valuable guidance in formulating and preparing a practical plan for shaping our ideas of conveying the truth.